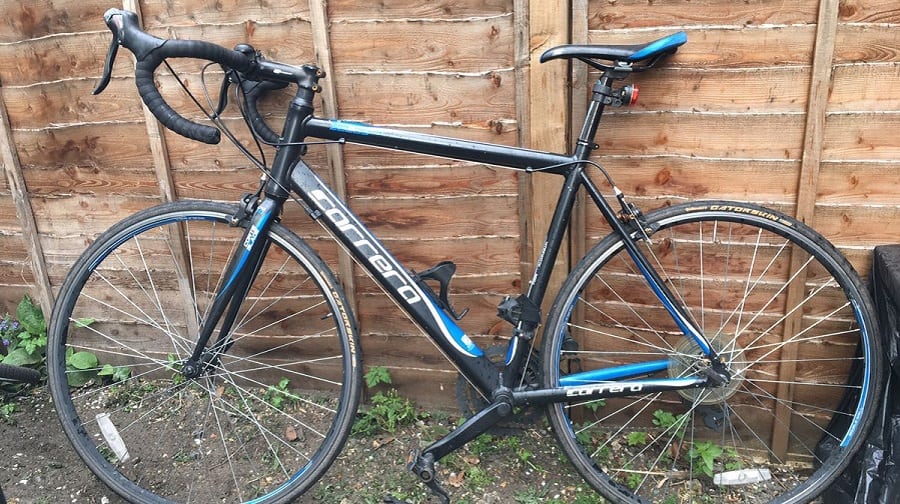 An Elephant and Castle dad is asking the public to keep an eye open for his stolen bike which he needs for a sponsored ride.

Peter Baffoe, 33, is due to take on a gruelling 200-mile sponsored bike ride at the end of the month to raise money for a new minibus for South London Mission.

In preparation, he asked his wife Winnie to put his limited edition blue and black Carrera Zelos road bike up for sale on online while he was away for a few days, so that he could buy a mountain bike with the money.

But before the father-of-three returned home to his family in Elephant and Castle, the bike was stolen from his mother’s back garden nearby, and he is now faced with the possibility of not being able to complete the sponsored ride.

“On April 19 someone contacted me with an offer and asked if they could collect it that day so I accepted the offer but they didn’t confirm at all.” The next day she was contacted by the online sales site to say this person had cancelled.

“It was only on my husband’s return when we went round to get the bike from my mother in law’s [on April 24] that we realised the bike was gone.

“His brother’s bike was still there and all our children’s bikes were there.

Peter Baffoe with his family

“His bike had been there for six months and there were no issues but as soon as I put it up [online] it was gone.

“[The website] gives a vague description of location when looking at items, and also on Sundays the bike is regularly used along the road outside his mother’s address as our children are given their bike lessons.”

Winnie said her husband had owned the bike for three or four years and that he bought it for £300.

She said Peter had spotted the bike in the SE1 area the day after they realised it was missing and that they were confident it was still in the area.

“Peter said he will use a tricycle if he has to to do the bike ride,” she added.

Peter’s sponsored bike ride is set to take place from Friday, May 26, to Sunday, May 28.

He is expected to cycle 200 miles from Wesley Chapel, in London, the final resting place of John Wesley, the founder of Methodism, to the place of his birth at Epworth Rectory in Linconshire, to raise money for a new minibus.

The South London Mission needs the use of a minibus for a number of reasons, including weekly foodbank and FareShare  collections, taking children and young people on country breaks, and Scout trips.

If you have any information regarding the whereabouts of the bike, please contact police by calling 101 or Crimestoppers anonymously on 0800 555 111 quoting crime reference 30121027/17.