Even the family dog is named after Lions legend Barry Kitchener. 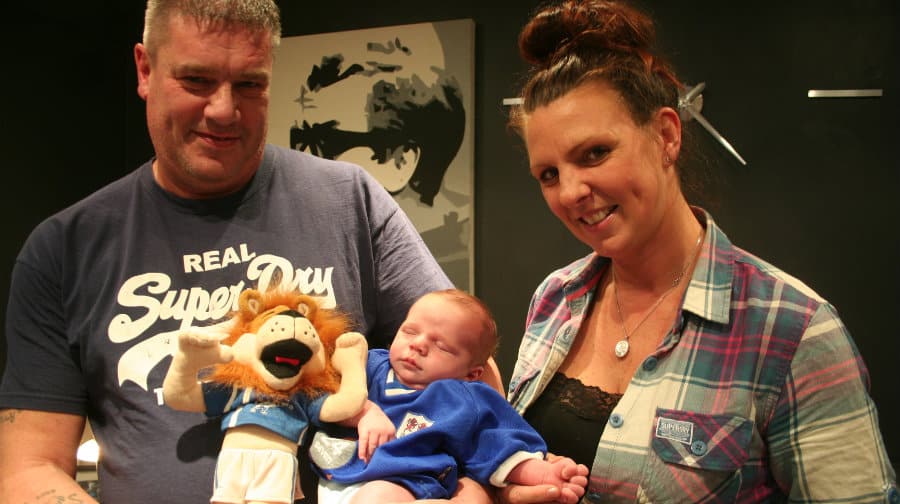 Dad Mike Bloomfield, a life-long Millwall fan who grew up in Bermondsey but now lives in Croydon, contacted the News to explain his controversial decision, as he made his way home from the registry office to his unsuspecting wife.

He said: “If David Beckham can name his son Brooklyn, then I can name mine Bermondsey! I just love Millwall and this is a good way to get the next generation involved.

“One of the women at the registry office was a Millwall fan and she loved it when she saw what we are going to name him. I threatened to do it but I don’t think my wife believed me! I’m not sure how she’s going to react.”

His wife Kelly, however, was surprisingly forgiving – at least, after a day or two had passed.

She told the News: “He did say he might do it but I didn’t expect it. He was a bit frightened to come home! I’m coming around to it though and I quite like it. It’s growing on me.

“I think he looks a bit like a Bermondsey, and it’s definitely unique. I don’t think anyone else has got a name like that.

“The funny thing is that we actually live in Croydon and are surrounded by Crystal Palace fans. Our friends who are Palace fans say that they’re just going to call him ‘Dave’ instead.”

Other possible nicknames include Bee and Den – with the little boy’s third name referring to both the home ground of Millwall and also to his grandfather Dennis.

As if that wasn’t enough, even the family dog’s name is influenced by Millwall, named Kitchener after the Millwall legend Barry Kitchener, who played over 500 games for the club between 1966 and 1982.

Mike said that, perhaps unsurprisingly, his little boy was going to grow up a Lions fan, despite Crystal Palace’s dominance in the area. In fact, while only born on October 27, Millwall’s smallest fan is already the proud owner of two tiny replica kits and a club teddy bear.

Mike said: “He’s got no choice – he’s Millwall. I’m hoping to bring him down the Den as soon as I can for his first game. They are just going to love him down there.”

Know any other unusual names in Southwark? Let us know and email joey@www.newsatden.co.uk

Shame they’re all named after Blackpool’s ground then.

No-one likes it but he doesn’t care,he is Millwall fucking Millwall..!