The family, who live in Bermondsey, are hoping to have Tommy home with mum and dad once-and-for-all this week 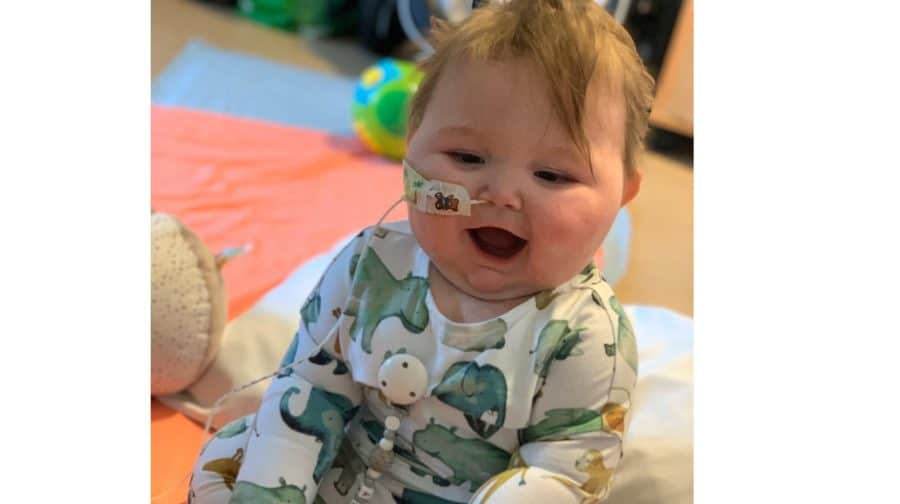 A little Bermondsey boy who seemed only hours from dying has recovered just in time for his first birthday – with his dad stepping up to donate part of his liver.

Tommy Collins was born on Monday, May 20 last year in St Thomas’ Hospital. But by the Thursday, aged just four days old, he began having life-threatening seizures and even slipped into a coma.

Dad Alfie, 27, was rushed to the Evelina neonatal intensive care unit with new-born Tommy while mum Maisie Davies was recovering on the maternity ward from the caesarean.

“It felt like the longest walk of my life. And when I walked in, he was on this cot-bed with a heater on it, he was on all sorts of machines,” says Alfie.

“It was overwhelming. They explained everything that was happening with Tommy and then it hit home – I might not be able to leave the hospital with my son.” Tommy’s condition was revealed to be a rare metabolic disorder, which meant his body could not process ammonia – effectively poisoning his blood and attacking his brain.

“For most people the ammonia level is below fifty,” explains Alfie. “When they tested him, it was three thousand. When we tell doctors now, they say, ‘no, it’s not possible. He would’ve died.’”

Doctors had to break the shattering news to Alfie and Maisie that one in three who have the rare condition, called OTC deficiency, don’t survive the first week of life.

It was touch-and-go for an agonising day.

“They said, ‘We’ve got 24 hours to get the ammonia levels down,’” says Maisie, aged 25. “We were asked if we would ever switch his life support machine off. We did a christening with all of the family around.

“I was just hoping he would get through it. I was thinking, if I get upset now I’ll be spending my last few hours with him a total mess.”

Against all the odds, the little fighter pulled through. “Suddenly his ammonia levels dropped quite quickly,” Maisie, a hospital receptionist, tells the News. Doctors kept the machine on to hope for the best.

“By Sunday the machine was removed, the monitor was removed. And by Tuesday he was looking around the room and smiling,” she adds. Mum and dad were in intensive care with Tommy for about two weeks. “It seemed like a lifetime,” said Alfie.

Once out of the neonatal intensive care, talk turned to a liver transplant at King’s College Hospital, the only way to cure Tommy.

“We went to King’s when he was about three months old, and we said we wanted to do it,” says Alfie. “As we were talking, I asked if it was possible to do living donors, and they said yes. So I said, well I’ll do it then.”

It began a process of many months of tests for dad Alfie to check he was healthy enough to be a suitable donor for his son.

And in the meantime, the family even managed to get Tommy home for periods of a time. But in October his ammonia levels surged again – bringing him back to hospital, where he has stayed ever since. In April, when all had seemed to be going well with Tommy, he became ill again – seriously so.

“His ammonia crept up again that month, and it became an emergency,” Alfie tells the News. “Tommy’s body was just getting tired of fighting.”

Surgeons at King’s rushed to get the transplant done, despite the coronavirus pandemic, to save the little boy’s life.

And in a strange twist, just fifteen minutes after Alfie was put to sleep for the op on April 28, it was discovered that a deceased person’s liver had become available.

“Talk about timing!” says Maisie. “But it was horrible. It was so scary having my partner and my son under the knife at the same time.” Thankfully, the operation, which had been due to take place a month earlier, but was delayed over coronavirus, went smoothly.

And because Alfie went under the knife for his son Tommy, that liver was instead given to a little boy with a metabolic condition from Great Ormond Street Hospital – saving two lives instead of one.

The modest father said: “There was no question of me not doing it. He’s my son at the end of the day. I would expect anyone to do the same for their kid.”

The family, who live in Bermondsey, are hoping to have Tommy home with mum and dad once-and-for-all this week. But before they can, they had to celebrate Tommy’s first birthday on Wednesday, as the News went to press.

“We’ve got loads of balloons and toys for his cot,” says Maisie. “Hopefully Alfie can come up and see him.” The hospital currently has restrictions on visitors over the pandemic.

They are both full of praise for the nurses and surgeons at Evelina and King’s for saving their boy’s life.

“They all made such a big fuss over Tommy, and they made it so much easier for us as well,” says Alfie, a former plumber and semi-pro footballer.

It’s been a rollercoaster year for the childhood sweethearts and Tommy.

Maisie and Alfie, who have been an item for nearly a decade, were due to marry next month.

“We’d been due to get married in June,” says Maisie. “But after things went a bit south, we had to postpone it.

“But once Tommy’s home and settled we’ll definitely be rebooking a date.”