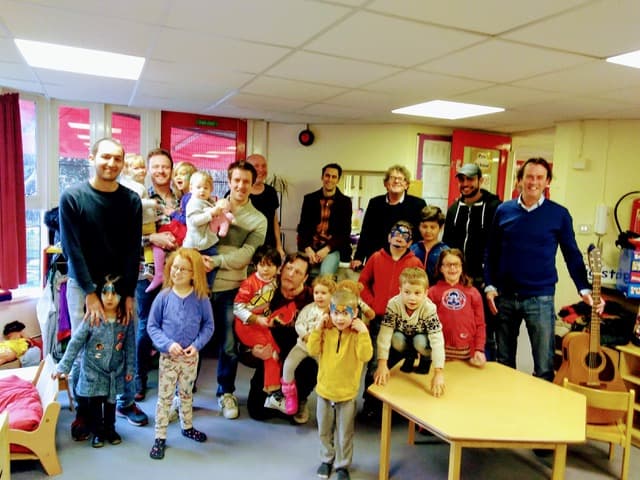 Dads House, a charity which gives support, advice and accommodation to single dads, recently received the Points of Light award from Prime Minister Theresa May in recognition of the impact they have made to their community.

It’s a unique service the charity’s founder hopes to replicate across the country.

“It’s important that single fathers have a place they can come with no judgement, just to have a cup of tea and a chat,” said Dads House founder William McGranaghan, 55.

“We need a support network there for dads, the rise in homelessness in London is just incredible, 72% of men’s homelessness is due to broken relationships, often those men are fathers.”

As well as a place to talk and have a cup of tea, the Dads House centre at Elephant & Castle will offer a number of services including a food bank, cooking classes, breakfast clubs and fun social activities.

Dads House was set up in 2008 after Mr McGranaghan became a single father to his one-year-old son. After he lost his job due to lack of flexible working hours, he realised there was no support network for men in his situation.

In 2017 Dads House helped provide accommodation for 66 fathers. Mr McGranaghan said the introduction of universal credit had been a ‘killer’ when it came to housing problems. As the News has reported, Southwark Council’s own data shows rising rent debt and food bank use after the benefits change.

The Department for Work and Pensions, however, has repeatedly claimed Universal Credit is working, and has simplified the benefits system.

Mr McGranaghan is optimistic after receiving the award that the charity can grow and help more people – especially with its new base at the Elephant.

“In London alone there are 20,000 dads who are the main carers for their children and this number is rising,” he said.

“We can’t wait to open our doors at the Elephant and Castle Shopping Centre and continue bringing together dads to share their experiences and receive practical and emotional support.“

He hopes their office will open in early August and urges anyone who needs or can offer support to visit their website: http://www.dadshouse.org.uk/