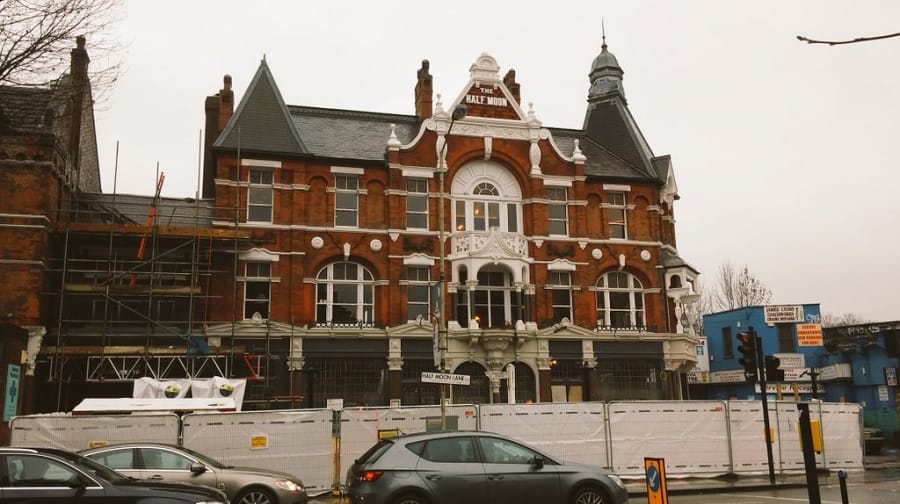 Half Moon Pub devotees will be waiting with bated breath next week, as Fullers look set to announce a re-opening date, writes Kirsty Purnell…

The pub chain had hoped to announce a date this week but are currently waiting for confirmation from utilities companies.

The Herne Hill pub’s been closed since August 2013, when a burst Thames Water pipe caused a devastating flood.

Since then, it’s been through a lot of changes. Firstly, it moved into the hands of Fullers. Then it changed from a music venue to a restaurant and kitchen in a much-contested planning battle. Finally, it even had its Asset of Community Value Status challenged by Freeholders Dulwich Estates.

However, the pub has weathered the storm and Half Moon enthusiast Peter Barrie is positive about the future.

“The community is in regular dialogue with Fullers about plan for the pub,” said Peter, who spearheaded the campaign to retain the Half Moon’s musical identity. “All credit to Fullers for that.”

“The Half Moon will be different to what it was in 2013 but there’s a chance for everybody locally to bring the pub back into the heart of the community.”

Managing Director of Fuller’s Inns, Jonathon Swaine, said: “The work carried out by our appointed contractors has progressed well and the pub and bedrooms are looking fantastic.

“We have also appointed a General Manager – Matt Dutson. Matt has already been meeting members of the local community and I know that he is going to be pivotal in developing the role of The Half Moon going forward. He is a very experienced General Manager and perfect for such an important pub within the Fuller’s estate. I hope that we will be able to issue a more definite opening timescale within the next week or so.”