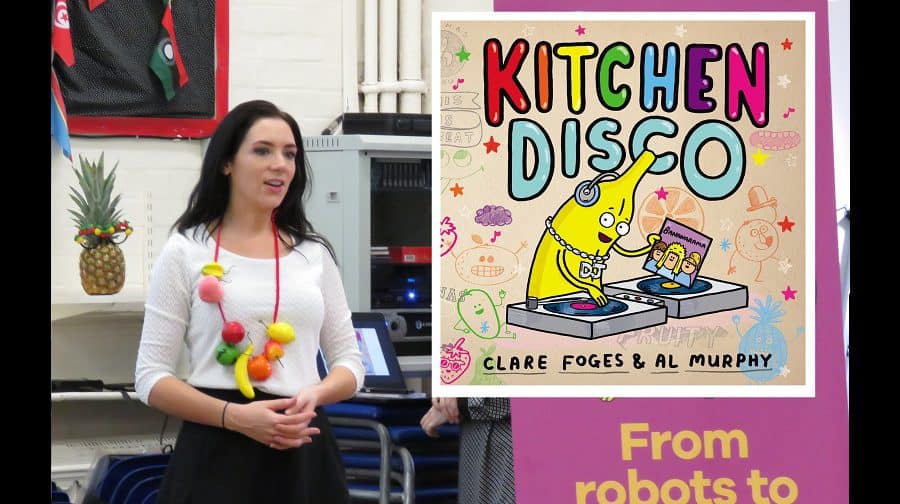 Early learners at a Peckham primary school were paid a visit by David Cameron’s former speech writer for an assembly to kick off Children’s Book Week.

Monday’s visit to John Donne Primary was Clare Foges’ only UK school visit, yet 700,000 copies of her debut book Kitchen Disco are set to be donated to reception pupils across the country.

“I was still writing it while I was working as a speech writer for David Cameron,” Clare said.

“I came up with it after a trippy dream on holiday and I wrote the verses lying on a sun lounger.

“The story is that every night when you’re asleep at night, your fruit jump out of the bowl and start dancing. And there’s a banana DJ and everyone goes mad.”

Kitchen Disco is being distributed to every four-year-old in the country by the children’s reading charity Book Trust.

The charity recently produced research showing that 66 per cent of teachers believe children need support from school and at home to become readers. Also that 93 per cent of teacher feel they need more advice finding great books for their pupils to learn to read with.

Clare added: “It’s an honour that our book was chosen to go to every four-year-old in the country. There’s 700,000 books being printed.

“It’s a rhyming book and the illustrations are beautiful and colourful. The rhyming is very punchy and I felt I needed to make sure it was fun for parents to be able to read as well.”

The book was illustrated by Al Murphy, who was also at the school to give a live demonstration of how his cartoons are made. Al said: “This is my first children’s book. Until now I have been doing a lot of adverts and commercial stuff. This feels really rewarding and you have the instant gratification of seeing all the kids’ faces, which is so rewarding.”