Southern Rail has advised commuters to avoid the station if possible 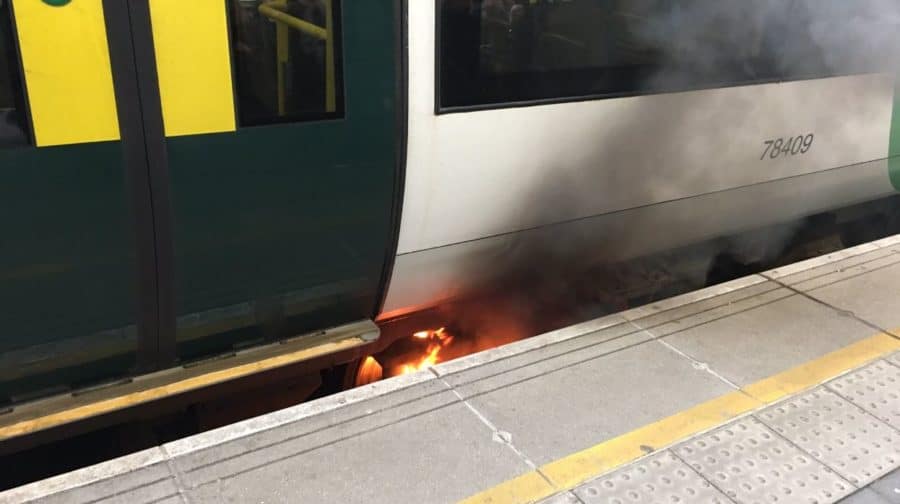 Commuters were forced to evacuate the train this morning due to a fire on the train (Image: Southern Rail)

Commuters have been forced to evacuate a Southern Rail train which had caught fire at London Bridge this morning, (Monday, April 8) causing severe transport delays.

Two fire engines were called to the blaze at 8.40am, which damaged approximately ten per cent of the underneath of one of the train carriages.

All passengers were safely removed, and no injuries were reported in connection with the fire.

Pictures taken of the fire by commuters show flames rising from the tracks underneath the train while it was pulled in at the station.

One commuter who took pictures of the blaze said: “When your driver says there’s a minor fault on the train and you get off to see it on fire. Yeah that.”

Another who took a video of the incident added: “I thought I could smell burning.”

Separately, on a different platform, an ill passenger was attended to, said Southern Rail.

Station staff shut down the power to three tracks at the station to allow fire crews to gain access to the tracks.

The fire was under control at 9.50am, said the London Fire Brigade. Fire crews from Dowgate, Soho and Dockhead attended.

In its latest update, Southern Rail said: “A fire under a train at London Bridge has resulted in some platforms being blocked.

“Train services running to and from this station may be cancelled, delayed or diverted.

“We advise to NOT travel through, or to London Bridge this morning. Please use alternative London terminals, such as London Victoria and London Waterloo.”

Further disruption is expected at South Bermondsey station, while some services may be diverted to Victoria.

Live travel updates can be found on the Southern Rail website here.

This article may be updated as more information comes in.