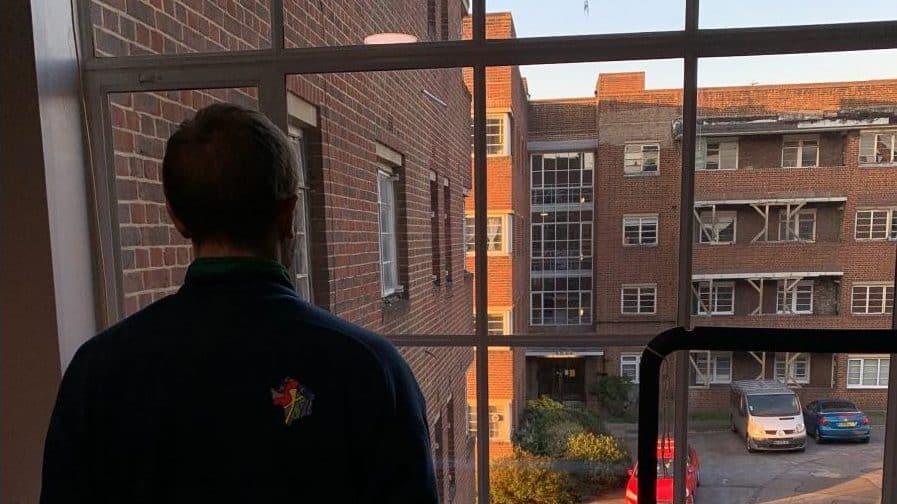 Ninety-six tenants from a ‘dilapidated’ block of flats in Herne Hill are demanding rent reductions, no evictions, and urgent repairs from their landlord, who is said to be worth £200m.

The letter was sent by the London Renters Union on behalf of nearly one hundred tenants living in Dorchester Court, a once spectacular Art Deco block, which residents say is now beset with structural problems, hot water outages, and vermin.

The group want all repairs to be completed by September 2020 to make their homes ‘warm, safe and dry’ – as is a legal duty for landlords – no evictions over rent, and tenants only required to meet half their rent during the pandemic.

Many have been left forced to claim Universal Credit during the pandemic or are struggling after being furloughed or becoming ill.

But despite the Coronavirus crisis and ongoing complainants with heating, hot water, cockroach infestations and wooden planks holding up balconies, they have been told they cannot have a rent break by their managing agents. The letter from the London Renters Union explains: “Your tenants have been sharing the correspondence they have had with staff at Property Partners regarding rent.

“This has revealed a persistent ignorance of both the timescales of applying for and receiving government support, and the difficulties surrounding eligibility.

“Moreover, even though many tenants are in similar situations your responses to them have been inconsistent.

“Taking all this into account, it is unreasonable and unsustainable for all of the tenants at Dorchester Court to be asked to pay their full rent.

“On top of these present concerns, there is a long history of intermittent provision of crucial services – including hot water and heating – during the colder months of the year.

“Many tenants are also suffering from issues with mould, damp and cockroaches due to a lack of repairs.

“If landlords fail to carry out repairs within a reasonable time frame then they owe tenants compensation.

“Given the length of time you have failed to address these problems, we believe you owe tenants thousands of pounds.”

It is the latest action in years of campaigning against the estate’s landlord Manaquel Ltd, owned by Heinrich Feldman who is a Sunday Times Rich Lister worth in excess of £200 million.

One renter, Michelle, said: “I am furious with the landlord for refusing to take the safety and wellbeing of tenants seriously.

“How am I meant to afford to pay back the rent I owe in the future when the industry I work in has been decimated by the pandemic?

“The landlord wants us all to spend years in debt even though he is a millionaire. We deserve affordable homes that are in a good state of repair.”

The estate is managed day-to-day by property agency company Property Partners, who act as a spokesperson for the landlord.

Despite sending their open letter on May 13, the union has so far only been told that the landlord is open to a group phone call, and has so far not responded to any of their claims or demands.

Four days after submitting a request for comment the News had still received no reply from the company in response to the renters’ claims.

The landlord submitted a planning application earlier this year that detailed plans for redevelopment – including adding new penthouses on the roofs in order to pay for repairs in the existing buildings – work that could see current renters evicted.

In a statement sent to Brixton Buzz, a spokesperson from Property Partners reportedly said the landlord was “committed to revitalising the development back to its former glory”, said repairs were estimated to run in excess of £10 million, partly due to the estate being listed.  They blamed delays on a minority of tenants and leaseholders.

“The general, continuous, persistent and ongoing resistance from these few long lessees has largely contributed to the protracted application, the increased costs of the repair to the building and the delay in being able to commence these much needed works, of which, ironically, they themselves now complain,” their statement claimed.

Dorchester Court was first built as a luxury block in the 1930s but is now in a state of abysmal disrepair despite being Grade II listed, and is currently on Historic England’s ‘at risk’ register.

Residents say they have been campaigning since the 1970s for basic repairs and critical refurbishment.