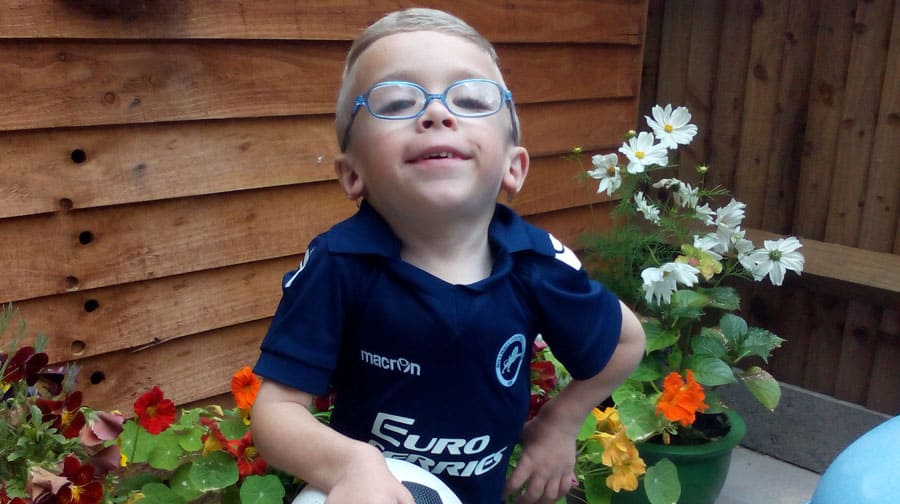 Harvey in his beloved Millwall kit

Vikki and Dean Brown have been waiting for fourteen agonising months to hear whether their six-year-old son Harvey, who suffers from the ultra-rare disease Morquio, will have the chance to take medication which could help him live a longer, happier life.

Morquio is an inherited illness which affects just 77 children in the UK. An enzyme deficiency means children like Harvey rarely grow to above three foot tall or live beyond their twenties.

As he grows older, the Millwall fan’s condition will gradually deteriorate until he needs full time palliative care.

After a clinical trial, the drug Vimizim was shown to help children like Harvey grow taller and stronger, need fewer operations, walk without mobility aids and live for longer.

Since it was licensed by the European Medicines Agency in April last year, Vikki and Dean have been waiting to hear whether the NHS would pay for the expensive drug to be offered in this country.

The NHS was due to make a decision last week on whether they would fund temporary access to Vimizim while the National Institute for Health and Care Excellence (NICE), which advises the NHS on the drugs it can afford to offer, prepares a full recommendation for October.

“We sat here waiting for three o’clock to come,” said Vikki, who was heartbroken when she and husband Dean found out the NHS had decided, after months of consultation, not to do anything until it got the recommendation from NICE.

As it could cost around £300,000 to treat one person for a year and will only benefit the small number of people who suffer from the rare disease, the NHS has been delaying a decision on whether to pay for the drug while NICE gathers all the evidence it needs to make a recommendation.

“It’s just dragged on and on and on and we are still no further,” said Dean, 45. “I can’t believe a human being can sit there and make a decision about another human being that you can’t prolong their life because of money,” said the delivery driver of Galleywall Road, Bermondsey.

Some children who were on the drug as part of the clinical trial have now had to come off it while they await the NHS decision.

“It’s cruel to take it away from people,” said Dean. “A vet wouldn’t do that to an animal.

“There’s money to help addicts yet there’s nothing there for these people. It’s wrong. They’re all human beings,” he added.

The NHS has committed to funding the drug if NICE recommends it should do so, which gives families of children like Harvey three months to get as many people supporting their cause as possible.

To show how many people are behind Harvey and other Morquio sufferers Vikki and Dean are asking everyone who is on Twitter to send a tweet to the Secretary of State for Health,  @Jeremy_Hunt with the hashtag #fundourdrugsNOW

“We just want to let him know that we’ve got people supporting us,” said Vikki, 46, who has been moved to tears by the offers of help the family has received.

“Let’s make some noise about this and make sure they hear us.”

James Palmer, NHS England’s Clinical Director for Specialised Commissioning, said: “These are really difficult decisions, which is why we rely on NICE wherever possible, and make use of the best available evidence, as well as extensive engagement with clinical experts, patient representatives and the public.”

Neil Coyle, MP for Bermondsey and Old Southwark, took up Harvey’s cause after he was elected in May. He has already written to health ministers and NICE and is due to meet with the family next week.

The MPS Society – the charity which supports Morquio sufferers, has also set up a crowdfunding page, to raise money for children like Harvey to get the treatment they need until the NHS decision in October.