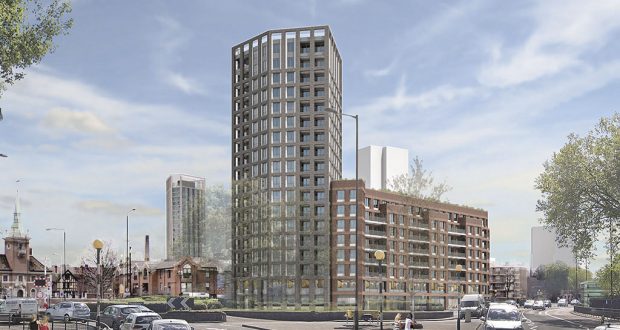 How the tower could look, if approved (Image: Southern Grove)

An eighteen-storey tower could be built next to the Rotherhithe roundabout if a developer’s bid is successful.

The £80m scheme would see the tower constructed near to the entrance of the Rotherhithe Tunnel on St Olav’s Court.

The developer, Southern Grove, announced this week it had exchanged contracts for the purchase of the land, and that it intended to submit a planning application to the council.

Nicknamed ‘The Brooklyn’, the mixed-use tower would include 150 homes and 25,000sq ft of office space.

“The Brooklyn is a fantastic addition to this site and will provide a healthy boost to housing and commercial stock in Canada Water, which is one of the capital’s regeneration hotbeds,” said Southern Grove’s chief exec, Tom Slingsby.

“Canada Water is going to be put on the map in a bold new way by the extensive regeneration that is going to take hold over the next 15 years and our own scheme will complement that effort.”

He said that Southern Grove would be looking for a housing association partner to provide ‘affordable’ homes.