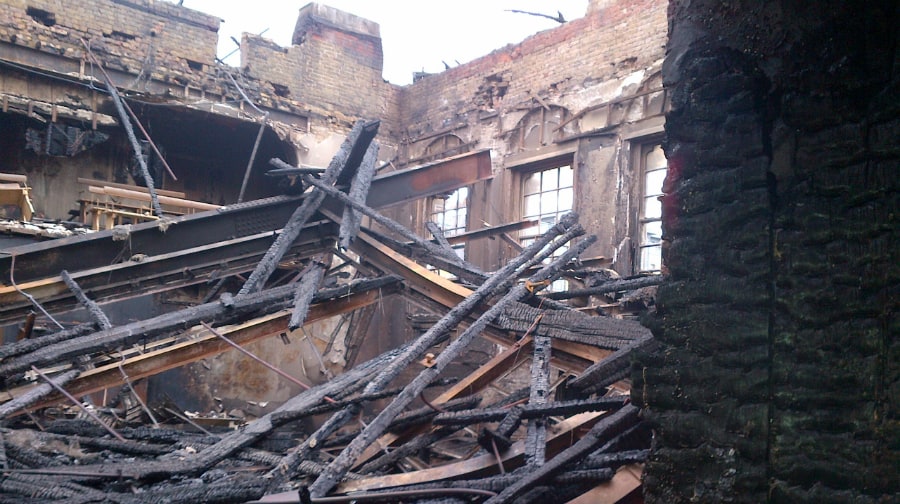 The aftermath of the Walworth Town Hall blaze in 2013

Southwark Council has spent £30,000 a month on the boarded up Walworth Town Hall, council papers reveal, as developer General Projects is selected to take over the costly refurbishment project.

The Grade II listed hall was gutted by fire in 2013, and has been vacant ever since. English Heritage have placed the former museum library and office space on its register of ‘at risk’ buildings.

According to council papers published in March, the developer’s successful pitch involves restoring the building into an arts and community space, with help from a £2 million grant.

The council says it is spending £30,000 to maintain and monitor the boarded up town hall each month, including 24/7 security as stipulated by its insurers.

In the aftermath of the fire, Southwark Council committed to saving the building, but later found an estimated £35 million refurbishment cost was prohibitive and said the only option was to look at other options, hence bringing in developers to take over the lease and divide up the space into some community and commercial uses.

General Projects describes itself as ‘not a traditional real estate businesses. Its successful proposal includes details for a new centre run by 20 staff, including a restaurant and café, and a ‘society room’, which community groups will be able to lease on a short-term basis.

In January, the council has also agreed a lease on a new Walworth Library and Southwark Heritage Centre, on Walworth Road, where some collections from the Cuming Museum, kept in storage since the fire except for occasional showcases, will be displayed.