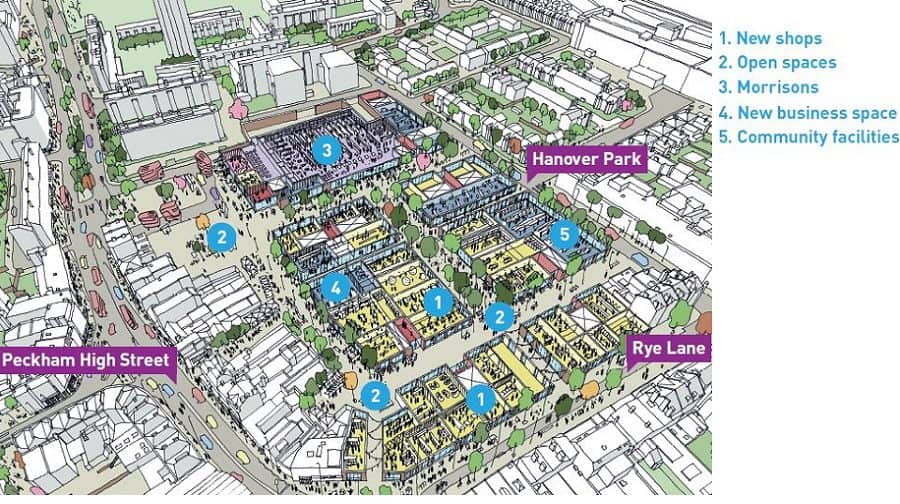 A property firm hoping to redevelop the Aylesham Shopping Centre in Peckham has showcased new plans for its high-rise housing scheme to include a ground-floor shopping complex.

Public consultation events have recently been hosted by Tiger Developments, who last year unveiled proposals for 400 new homes on the site, in a building up to 20 storeys tall.

But the firm has since released artist’s impressions of what could become the ground floor of the development.

Tiger has described the designs as “pedestrian-friendly” and would “open up this large site and help stitch it back into the surrounding streets”.

Before the consultation, the company said: “We would like to explore with local people how we get the right mix of daytime and night time activities, shops and businesses, community activities and open spaces, to make this a place that celebrates the best of Peckham.

“The ground-level will be how 95 per cent of people experience the Aylesham Centre site on a day-to-day basis, so it’s very important.”

A spokesman for the company also told the News: “We know that the 20-storey aspect will take up a lot of attention, so we want to get the first step right.”

The spokesman added that another consultation, with details of the residential aspect of the scheme, will likely be shown to the public “before Christmas”.

In April, community group Peckham Citizens worked with Tiger Developments’ development director, Graham Haydon-White, who said publicly “Our intent is to comply with [Southwark Council’s] policy, which is for 35 per cent of new homes to be affordable to local people”.

Peckham Citizens have also lobbied the company to ensure that the new homes will be priced in-line with local average incomes, and that one-third of all jobs created, including managerial roles, will go to local people.

There is a very strong local campaigning base that fights anything out of character with the streetview. There are no buildings 20 stories tall in the lane.