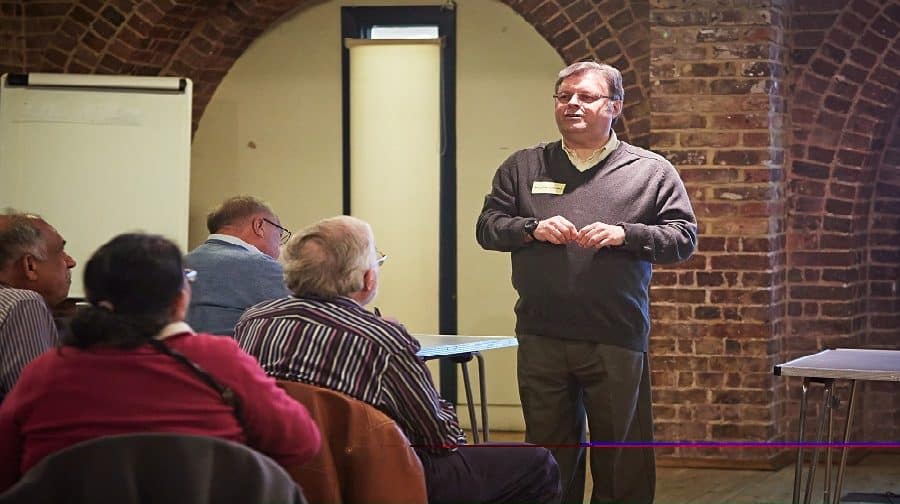 Barry Coker, speaking at the Lambeth and Southwark diabetes group

The number of diabetics in Southwark has reached a record high, with more than sixteen thousand people now living with the condition.

According to figures released by the charity Diabetes UK, the number of people diagnosed with the disease in Southwark has soared to 16,121 people, an increase of 3,310 in just a last year.

Around six per cent of the borough’s total population now has diabetes, but the charity has warned that many more people do not know they have the condition.

Barry Coker, 67, who chairs the Lambeth and Southwark Diabetes UK Group, based at St Peter’s Church on Liverpool Grove, Walworth, discovered he had diabetes thirteen years ago.

The retired auditor from East Dulwich, who grew up on the Walworth Road, has six monthly checks to ensure he still has feeling in his feet and that his blood pressure and heart rate is healthy.

He says: “Having diabetes is a bit like pouring sand in an engine.

“It is going to damage the machinery, but you don’t know exactly where the problems might arise.

“If you’re diabetic you have to look after yourself and be prepared to have all the necessary check-ups and make lifestyle changes.

“It can be lonely at first, but treatment and support is improving all the time.

“A simple blood test can diagnose diabetes. Take it.

“If you’re diagnosed with diabetes, come to our meetings and talk to people who have the condition to find out what it is like to live with the condition.

“We have regular speakers who give advice and support, and we help each other.”

There are two types of diabetes. Type 1 is an auto-immune condition where the body attacks and destroys insulin-producing cells, causing glucose to quickly rise in the blood.

Type 2 diabetes means the body doesn’t make enough insulin, or the insulin it makes does not work properly.

According to the NHS, symptoms of diabetes include urinating more than often, feeling very thirsty, tiredness, unexplained weight loss, frequent thrush, blurred vision, and cuts or wounds that heal slowly.

Although Type 1 diabetes is not preventable, three in five cases of Type 2 diabetes can be avoided or delayed through leading a healthier lifestyle.

Obesity is a leading cause of Type 2 diabetes, and Southwark has one of the highest obesity rates in the country, with almost half of all adults officially classed as obese.

Roz Rosenblatt, Head of London at Diabetes UK, said: “Unless we act, and urgently, diabetes prevalence will continue to rise.

“Both Type 1 and Type 2 diabetes are serious conditions that can lead to devastating complications such as amputation, blindness, kidney disease, stroke and heart disease if people don’t receive the right care.”