Grandmother, 82, and her dog, Dido, hope to raise £1,000 for Guy’s and St Thomas’ with sponsored litter pick

If you see a lady with bright red hair and a greyhound picking up rubbish, that's me, says Diana 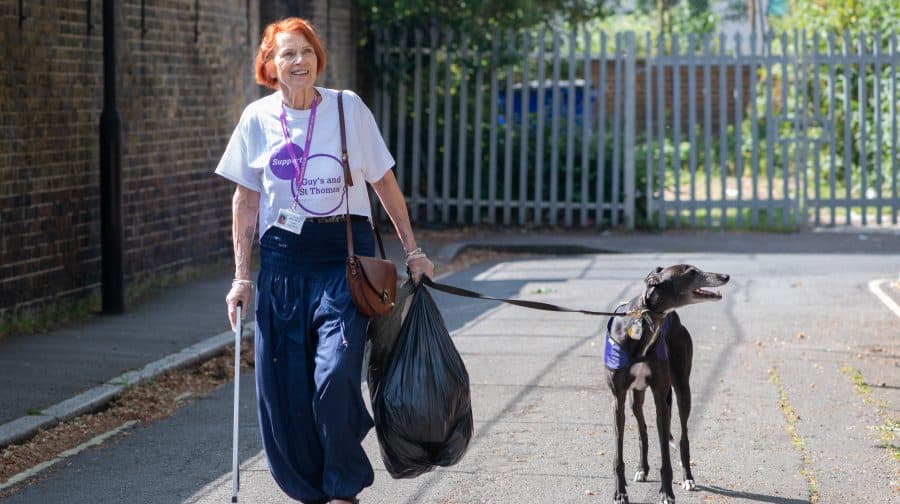 An 82-year-old great-grandmother has been using her daily walk with her dog to litter pick, while also raising money for Guy’s and St Thomas’ hospitals.

Diana Mukuma, from Kennington, normally volunteers at St Thomas’ with her dog, Dido, a five-year-old greyhound.

The pair normally visit patients on the wards to cheer them up, but since the start of the coronavirus outbreak, have been forced to stop.

Now Diana and Dido have been picking up a minimum of thirty pieces of litter in thirty days around Kennington to raise money for the hospital.

“The extraordinary staff at Guy’s and St Thomas’ are pulling together to care for patients so I wanted to give something back to them,” said Diana, who has been volunteering at the hospital for eight years.

She hit upon the idea for novel fundraising because she realised: “I’m not into doing press ups or running, nor am I handy at sewing or baking.” Instead, said Diana, “we’ll be picking up a minimum of 30 pieces of rubbish every day for 30 days along Lambeth’s streets and parks come rain or shine.”

Diana, who has 19 grandchildren and five great grandchildren, added: “If you should spy an elderly lady, with bright red hair, walking an elegant greyhound whilst picking up odd bits of rubbish with a grab stick and a black bin bag – that’ll be me and Dido.”

With the help of her granddaughter Thaïs, the duo’s exploits are now being detailed daily on Instagram. “We love following Diana and Dido’s updates with their challenge.”

To follow their fundraising progress or donate, you can find the appeal here.

Dido and Diana’s adventures can also be found on Instagram here.

Southwark NewsNewsGrandmother, 82, and her dog, Dido, hope to raise £1,000 for Guy’s and St Thomas’ with sponsored litter pick