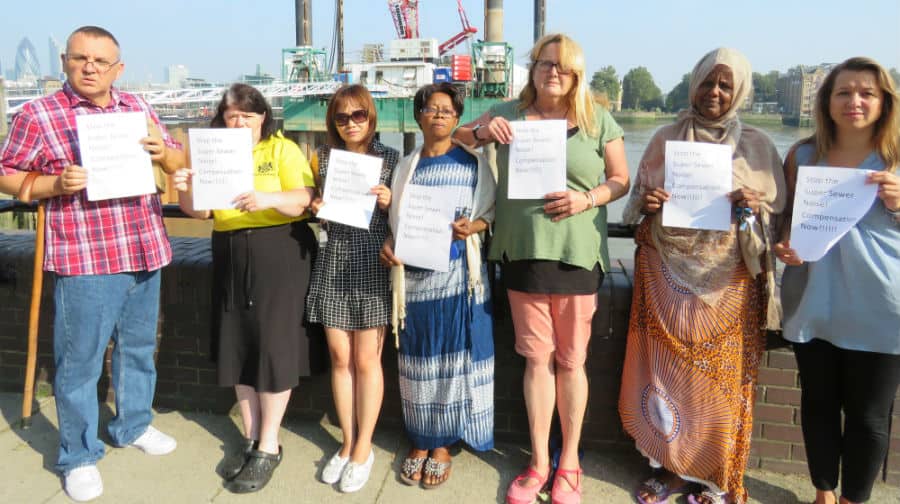 Dickens Estate residents by the works

A proposal to erect a 2.9 metre high “transparent acrylic sheet” along the Thames on the Dickens Estate, to help block out drilling noise from the ‘super sewer’ site, has been criticised by residents as a “waste of money”.

The 73 metre long screen would be 10mm thick and is part of an effort by developers Tideway to further minimise noise of works on the super sewer in Chambers Wharf.

A planning application was submitted in August for the screen but residents of Fountain Green Square, where the screen will be, have appeared united in opposing it.

One resident said in an objection on the planning application: “All necessary steps were taken for sound control and they work.

“To cut off residents’ and visitors’ views and the enjoyment of the Thames from their homes and from the Thames Pathway, is terrible and unnecessary.

“This is wasted money and worse, an impediment to quality of life on the river.”

Another said: “It won’t be long until the Perspex wall will be covered in graffiti, posters, engravings and notes about lost pets.”

Resident Helena Norval has already had her balcony encased by glass

Tensions between Tideway and Dickens Estate residents came to a head last week when a group stormed out of a community meeting over claims they weren’t being listened to.

The controversial works began earlier this year, with the Chambers Wharf site being one of 24 others making up the Thames Tideway Tunnel – a £4.2 billion project aiming to help tackle untreated sewage flowing into the Thames from London’s Victorian era sewers.

A Tideway spokesperson said: “We proposed a temporary noise attenuation screen as a way to further minimise disruption to residents. A planning application has been submitted to Southwark Council, and we are awaiting their decision.

“We are always available to meet with residents. As well as a monthly community group, our information centre is open every Wednesday from 2-8pm, for residents to talk to our team. Anyone who wants to meet us can also contact us through our helpdesk on 08000 30 80 80.”