John Ryan, who uses a wheelchair, says the council has refused his bids for a bungalow because he is in rent arrears of £5,000 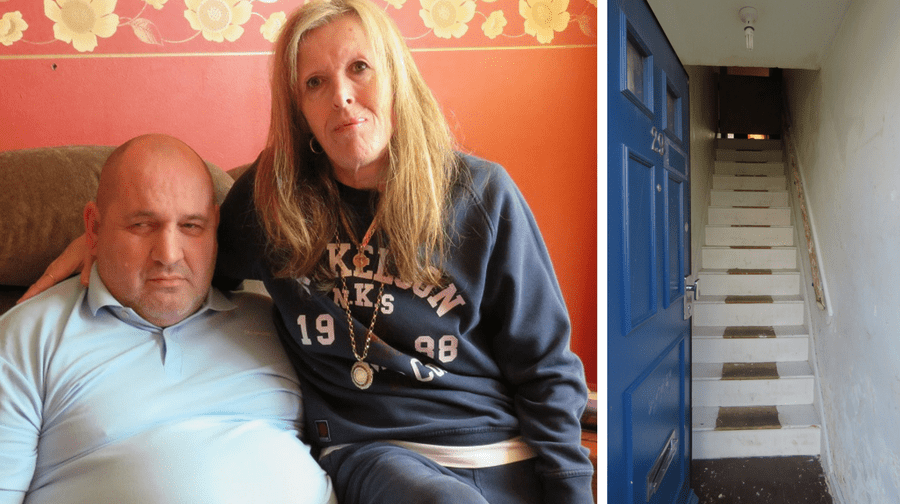 A disabled man who lives in a flat with thirteen steps leading to the front door says he has been left housebound after the council refused to let him bid for a bungalow.

John Ryan (pictured) lives in a council property in Lucey Way, Bermondsey, which he says is classed as a ground-floor flat – despite a staircase leading to it from the front door.

The 53-year-old spends each day sat in an armchair as the doorways in the flat are too narrow for his wheelchair – and he can’t get down the stairs to go outside.

Mr Ryan says he and his wife Mary Deadman, 54, ended up in rent arrears of £5,000 after they were both sent to prison in 2012 – and that the council won’t let them bid for a more suitable property because of this.

“We’ve had a fire inspector already come here a while ago and he said it’s unsuitable for me to live here because if there’s a fire I’ve got no way of getting out because I can’t walk,” said Mr Ryan.

“I’ve got narrowing of the spine and damaged vertebrae and damage in my leg.  I suffer from memory loss because I’ve got a shrunken brain. I was having falls and it damaged my back, and I have epilepsy.

“A JCB went over my head when I came up from a manhole. I think that was in 1990 and the condition has got worse.”

Mr Ryan said he and his wife were sent to prison after he was caught with drugs abroad.

“We went to Jamaica and me being a bit silly I bought a bit of cannabis,” he said. “Mary didn’t have any cannabis on her and she didn’t know I had it.

The couple say they have paid £700 of the £5,000 rent arrears and that they want to stay in the area to be near to their son and daughter.

“This case is not straightforward but it is fair to say that we do need to reassess the family’s housing need and look into all aspects of their situation, including the significant arrears, before we move forward,” she said.

“We will rectify any errors and speak with the family directly in order to resolve their housing situation.”

If this man’s arrear was £5000 when he went into prison and he came out in 2014, why hasn’t it been repaid by instalments by now, showing a commitment to clearing the debt? Or does he think the world owes him a favour just because he’s classed as disabled? I’m sure if someone owed him £5000, he wouldn’t be happy to transfer them either. Also, he’s lucky to have kept his home if him and his wife weren’t actually living there for over a year. The property could’ve been given to a law abiding citizen in need, and this man and his wife would’ve been rehoused by the Council as a priority when they came out of prison – to an adapted ground floor flat, as they wouldn’t have accrued arrears for a property they weren’t living in!