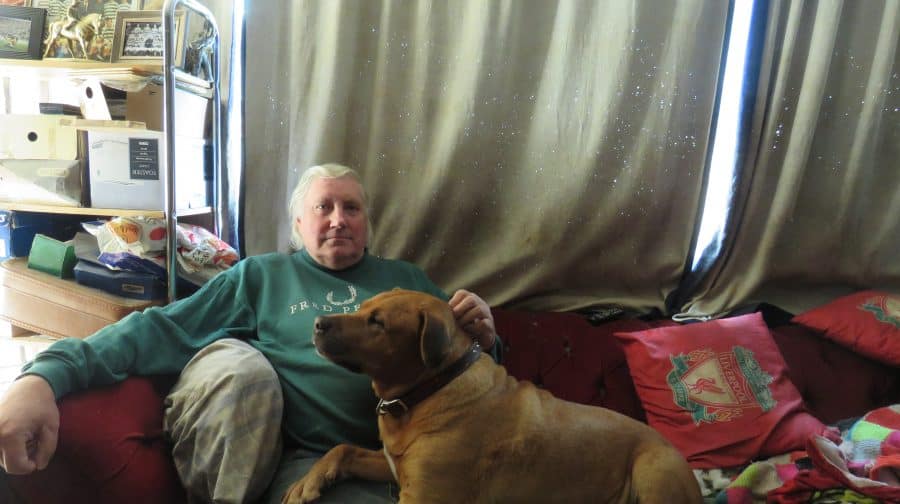 Mick Monid, 68, was left with three feet of standing water in his council flat when it flooded for the fourth time

A disabled pensioner was left with three feet of water in his council flat after it flooded for the fourth time.

Michael Monid, 68, who lives in McIntosh House on the Silwood Estate, had been dealing with the leak from a bathroom pipe for over a month before it dramatically caused water to gush out his front door on August 11.

The former cleaning manager, who suffers from severe arthritis, slammed the council for not repairing the pipe – which has still not been repaired – and for allegedly leaving him exposed to asbestos.

Mr Monid, who had to give up work in 2009 after undergoing a double hip transplant, said: “It was running out the front door. I was trying to do it with a bucket and mop but it was like sticking your finger in a dyke.

“It was coming back so quick I couldn’t keep up with it so I went round to my daughter’s.

“She said ‘stay the night Dad don’t go back there because the place is rotten and damp and everything.’

“The council sent three lots of people down. The last one who said no that’s sewage and just walked off. Mr Monid returned to his flat the same night because he did not want to leave his pets, including his dog, Bailey, 14, in the flat on their own.

The water turned out to be from a hot water pipe – and engineers eventually managed to shut off the flow to the leaky pipe.

However, the grandfather is angry that the pipe has still not been fixed two months from the leak’s start, and that he was left allegedly exposed to asbestos in the pipe’s paneling for a week.

He told the News that a plumber recognised that the paneling surrounding the leaky pipe was asbestos but that it wasn’t removed until five days later.

He said: “The fact they left me exposed to the asbestos for five days – it’s probably not life threatening but there are procedures they have to follow.

“As waste disposal it’s got to be handled properly.” He told the News he found the experience “very stressful” and that he had even fell over from light-headedness – cutting his head in the process – as a result of it.

Due to the flooding, the 68-year-old had to throw away his hallway interiors and lift his possessions into his living room, despite having arthritis.

The flood was the fourth that has happened in his home since he moved there in 1986.

On previous occasions, the flooding was caused by sewage which backed up in Mr Monid’s bathroom because of upstairs neighbours flushing nappies down the toilet.

The incident left him with sewage staining over his house.

On another occasion in 2009, parts of his garden subsided leaving a gap in his living room to the outdoors allowing rainwater in.

Councillor Stephanie Cryan, cabinet member for Housing Management and Modernisation, said: “We responded to a repair log back in August and fixed the pipe but quickly realised that far more issues needed dealing with than the initial report.

“We now have a full plan of works in place for Mr Monid’s flat including bathroom fitting replacement, washing machine fitting and full redecorating, among other works.

“We have not identified any issues with sewage and any asbestos issues are contained and dealt with using specialist contractors. We will also ensure that Mr Mohid continues to receive any housing support he needs.”