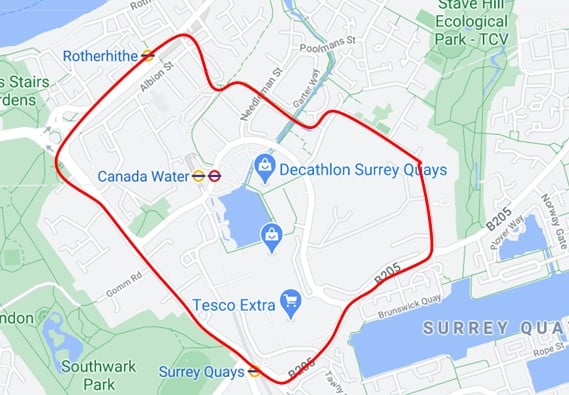 The area the dispersal order covers

Police have authorised a dispersal order for Canada Water in response to youths chucking fireworks at people, businesses and homes.

READ MORE: Canada Water ‘under siege’ by firework-slinging youths as a specialist police unit is drafted in

The order was authorised at 4pm on Sunday, but was not publicised until today.

It gives officers the power to exclude people from the area for up to 48 hours.

A Section 35 Dispersal zone has been authorised by Insp Brannan following firework related anti-social behaviour in the #CanadaWater area.

This order began at 16:00hrs on Sunday, 25 October and runs until Tuesday, 27 October at 16:00hrs, covering the area indicated on the map. pic.twitter.com/Xnsml7Gq4r

Public order police have been brought into Canada Water today to tackle the latest wave of youths throwing fireworks at people.

On Saturday, punters enjoying a drink in Ledbelly’s bar were forced to flee after being targeted with rockets by youngsters.

In another case, a girl was allegedly hit in the mouth by a firework.

Police today told the News that some of these fireworks are being modified, to make them even more dangerous.

One group of youths thought to be behind the fireworks had been identified by police, with one alleged ringleader being singled out to answer questions at a police station.

But officers say there is now a new group of teens involved, who are yet to be identified.

“Misuse of fireworks can have damaging consequences, and we understand how disruptive and distressing these kind of incidents can be to local communities and businesses,” said Inspector Tom Cornish.

“They can be reassured that we will continue to make every effort to stamp out this kind of unacceptable behaviour.”

Inspector Cornish urged those who had suffered injuries or damage to their premises to contact 101.