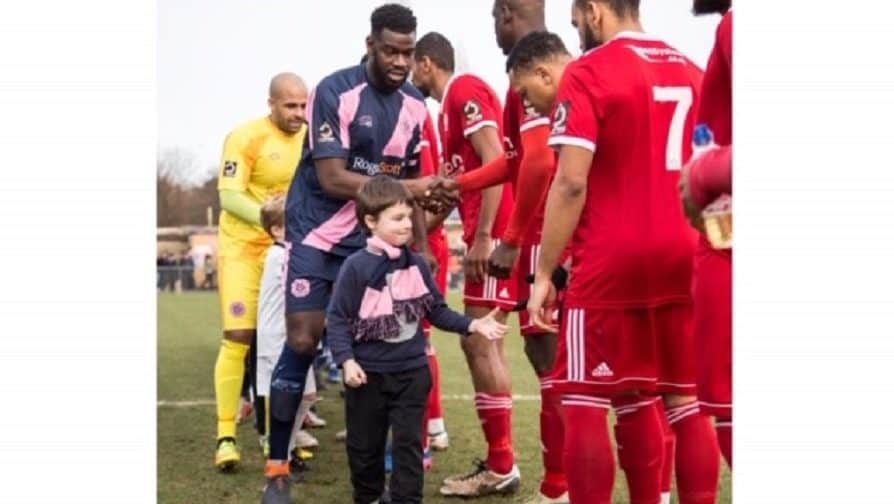 A six-year-old Dulwich Hamlet fan who was left crying tears of ‘pure sadness’ after being turned away from a sold-out game in December was delighted to run out on pitch as the team’s mascot this month.

Six-year-old Eli, from Grove Park in Camberwell, was left inconsolable after missing out on watching Hamlet play Slough Town on December after a record turnout.

Eli’s Dad, James Lynch, said he tried his best to prepare Eli that they may not make it in, but as the realisation dawned on his son that tickets were running out fast, the youngster was left devastated.

“They were quiet tears of pure sadness and disappointment,” James told the News, “the worst kind!”

Although the family were turned away at the gates, the kind-hearted club decided to find a way to put a smile back on Eli’s face.

“Eli and I were having a conversation about how you deal with knock-backs,” remembers James. “At which point someone from the club came over and asked if Eli would like to lead the team out in future.”

Eli was selected as a mascot for the Dulwich Hamlet v Welling United game on Saturday, February 9 and, as the club had also arranged for his school to have free tickets as part of its community programme, he got to proudly walk out on pitch with his friends from Lyndhurst Primary watching Hamlet win 2 to 1.

“I had a great time,” Eli said afterwards: “I liked talking to the captain and felt like a celebrity when I ran onto the pitch.”

“He was already getting into the club and how he is a super-fan,” his Dad told the News. “The ethos of the club is about welcoming, and that comes through so strongly with all that they do,” he added.

James says the family-friendly atmosphere has made all the difference to the whole family, including Mum Jess and three-year-old Stella, but especially to Eli’s elder brother Sam, aged nine, who has cerebral palsy and uses a wheelchair.

“It can be a challenge to get Sam involved in things, but at Champion Hill we couldn’t wish for a more supportive environment,” said James.