"It wouldn’t have lasted long as it was getting very distressed and kept going under the water", said a Swan Sanctuary volunteer 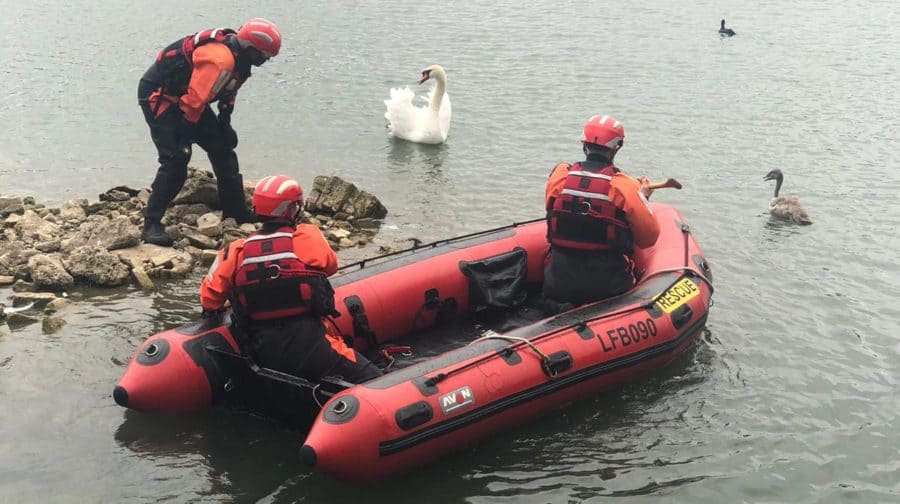 A ‘distressed’ baby swan which got its leg tangled in fishing wire at Surrey Quays was rescued by firefighters on Friday morning.

A volunteer from the swan sanctuary called the brigade to help untangle the trapped animal – who would not have lasted long without their efforts.

Firefighters used a water rescue boat to reach the ‘distressed’ cygnet before handing it over to swan sanctuary volunteer, Ann Aikten-Davies.

She said the swan, which was only born in May, will sadly not be able to return to its parents, as they will reject it – but it will be cared for at the Swan Sanctuary until it is well and old enough. “We don’t know how long the swan had been there, but I got called this morning and I think it must have been there longer as its leg was very badly swollen – almost double the size of the other leg,” said Ms Aitken-Davies on Friday.

“It wouldn’t have lasted long as it was getting very distressed and kept going under the water.

“I phoned the RSPCA initially as I knew it needed a boat, but they weren’t able to help and advised me to phone the fire brigade.

“Because of how bad the leg was, we couldn’t just put it back in the water. It will come back to the sanctuary for a course of anti-biotics and then we will release it along with all the other cygnets we have later this year.

“I’d like to say a huge thank you to the firefighters – they were absolutely brilliant.” The baby animal was handed over to the care of the Swan Sanctuary, who will give it antibiotics for its injured leg before setting it free when it is old enough

Ian Barritt, who managed the fire brigade crew at the scene, said that calling the RSPCA is the best thing to do first, but that the fire brigade is happy to attend if specialist equipment is needed.

“Ann did the right thing by phoning the RSPCA first, as we would always advise people to do if they see an animal in distress. If they need our specialist equipment we are happy to attend, as in this case.

The cygnet’s mum was also there and was quite ‘stressed’, he added, so firefighters put their boat between mum and baby so she kept her distance and the crew were able to release the wire trapping the baby swan.

The swan was rescued by 10.20am, and is now in the care of the sanctuary.