‘Do they want to kill the business?’: Peckham nightclub owner hits out at Rye Lane closure

The road has been closed since July 6. 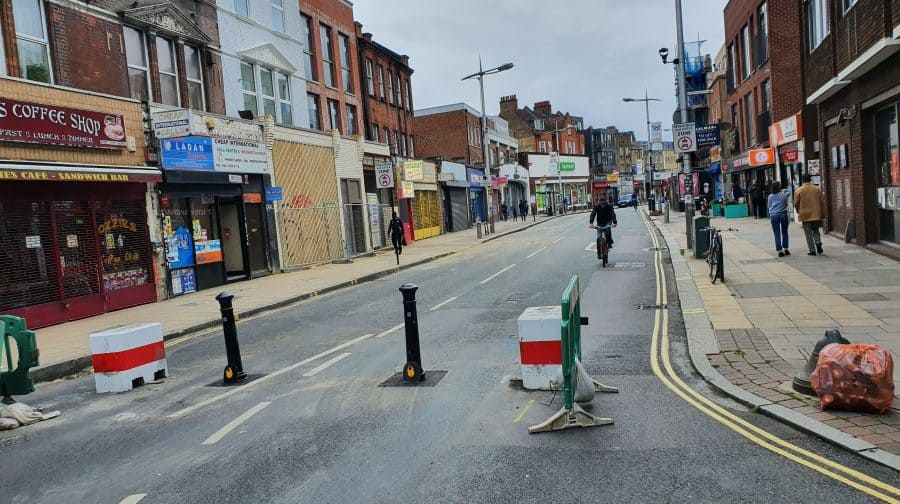 The owner of a popular Peckham nightclub has said it could be put out of business by new road closure rules designed to help people keep to social distancing guidelines, writes Kit Heren…

Ciaran Canavan, who runs Canavan’s Peckham Pool Club on Rye Lane, has said the closure means that the company that delivers his beer cannot get close enough to drop it off. The club makes a large part of its money from beer sales, he added.

Before the coronavirus lockdown forced pubs and clubs to shut in March, the delivery company would take the kegs into the club and install them for Mr Canavan, 54, who said he has a bad back and cannot lift heavy objects.

But Southwark Council closed Rye Lane to traffic in early July “to allow more space for social distancing for shoppers, cyclists and pedestrians,” according to a statement on the council’s website. There are spaces for delivery drivers to drop off goods for retailers on the road, but these are both hundreds of metres away from the club.

The club is almost out of beer, Mr Canavan said – and the situation is so desperate he is considering meeting the delivery drivers as close as they can come and rolling the beer down Rye Lane to the club himself, despite his bad back. The club has been running for around ten years, but Mr Canavan is not even sure if he will be able to afford the rent, which is due later this month. Staff numbers have already been cut by two-thirds, from fifteen to five, since the start of the lockdown.

He said: “I feel very let down, to be honest. The way things are going, I think we’re going to go out of business. It’s almost as if they want to drive the final nail into the club’s coffin. I have rent to pay here and I don’t know if I’ll be able to meet my payments.”

Mr Canavan said the council did not consult him about the decision to close the road, and more than ten phone calls since about the situation have gone unanswered. It is unclear when Rye Lane will be reopened to traffic. The council statement says the closure “will be reviewed and monitored on a regular basis.”

While his beer deliveries are a major concern, he is also worried about the possible danger the road closures might pose to people who visit the club – especially women.

He added: “I’m open until 4am… but people can’t get taxis or Ubers to pick them up when they leave. It used to be, we’d help people into their taxis as they left, we’d make sure they get away safely. Now we’ve just got to send them walking away in the middle of the night. I’m worried it’s not safe.”

Responses to widespread road closures in Southwark and across London during lockdown have been mixed. Some people like Mr Canavan have worried about the effect on businesses but others have said that they have found the move liberating.

Dan Cooper, a local designer who has lived in the area for several years, said that closing Rye Lane to cars has made him more likely to visit local businesses than before.

He said: “It’s just so much better and feels a lot safer. Before lockdown, shopping on Rye Lane was a bit of a nightmare because of all the traffic. Now, I’ve made a point of cycling through here as much as possible and I’ll often stop off and buy things from shops on the road.”

Cllr Richard Livingstone, Cabinet Member for Environment, Transport and the Climate Emergency, said:“Local businesses bring character, diversity and vitality to our high streets, and we are keen to support them through these difficult times. We are in continuous communication with Rye Lane traders, as council officers visit daily to address and accommodate individual concerns wherever possible.

“We have for example installed two new loading bays, on Bournemouth Road and Cerise Road. This means that deliveries can be transported to Rye Lane by trolley during the closure.

“These measures are part of a package of available guidance and advice for businesses to help their customers to visit them safely and to operate as securely as possible.”

This is so stupid, since the road closure only cyclist are enjoying the road and everyone else afraid of not getting hit by fast coming cyclist end up on pavements anyway. It hard to understand how baseless this road closure was and how badly it is hitting businesses that are suffering the most currently.

It has actually made everything much much worse as Rye Lane is now used by illegal street sellers, singers with awful voices begging for money and making awful noise (she is using loud speakers and microphone). There are illegal barbecues and street parties. I’m too scared of cyclists going too fast so end up walking on the pavement anyway.
Living on Rye Lane is pure nightmare (I have no choice otherwise would have moved long ago) and this road closure made it 100 times worse.
The police and Southwark council have done absolutely nothing to sort these problems.
There is no law or order in this country for ordinary people.

Id like to tell Dan Cooper that many people have been shopping on Rye Lane for years without issue. The new commers to the area dont seem to gove a damn about folk that have been her for years. Im 80 and depend on the buses that go down rye lane for my shopping, but as long as Dan can ride down there and buy his truffle oil its all good.

I’m a uber/deliveroo motorcycle driver and I reject job pickups from the Takeaways on the highstreet because of the pedestrianisation. I need to load my vehicle near by because of thieves and I lose time and money walking far distance to pickup and order.

And I’m not the only one, more of us drivers have said the same thing, we don’t pickup from the highstreet for this very reason.

I guarantee the takeaways are strongly affected by this. Southwark Council has officially “Killed” the highstreet. Welldone southwark, can’t wait until next election, we’re not voting you in again.

We have not been Favoured by closing down ryelane, people are hungry. because we can’t take the bus to ryelane anymore to buy our fish, meat and other groceries.
going to ryelane used to be fun, but since there are no more buses,bus 78 to take us shopping we just have to stay home.
the distance is too long for people who have Asthma, or who quickly want to get home to use the toilet.
We have not been Favoured at all.
we have been bullied out of food.