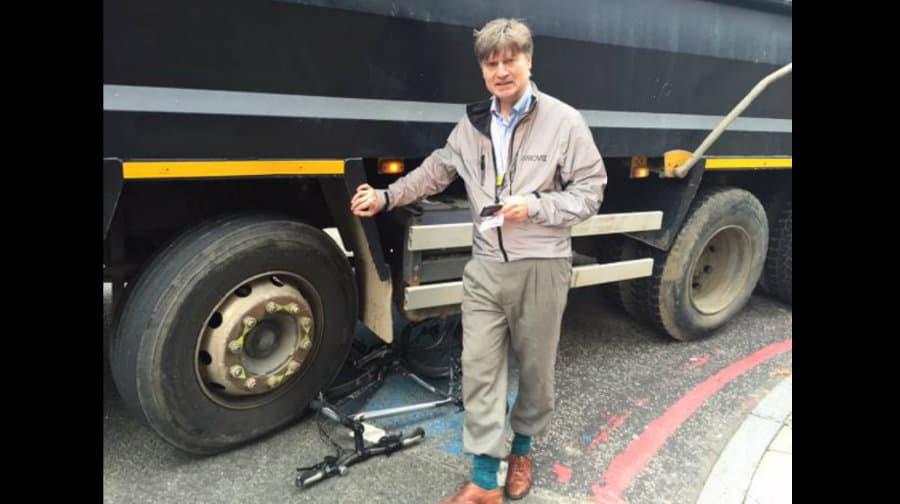 Adrian beside his crushed bike.

A doctor at Guy’s Hospital has called for tighter regulations on HGVs, after miraculously escaping without injury when his bike was crushed on Southwark Bridge last week.

Dad-of-three Dr Adrian Hopper was cycling past the junction with Southwark Street on October 15 when he was hit by a tipper truck, which “mangled” his bike under its middle wheels.

Incredibly, Adrian was thrown free of the wreckage and ended up “just a little bruised.”

He told the News: “I’ve been cycling for 30 years and I’ve never had a problem. This is how all those cyclists get killed: they get hit by the front wheel and dragged under the middle wheels – there’s no escape.

“My bike disappeared under the middle wheels of the truck and got completely mangled. If that was a human being… you wouldn’t be very well, shall we say.”

Witness Charles Bell arrived at the scene just moments after the accident took place and feared the worst when he saw the carnage.

He said: “When we saw the bike under the wheels we thought the cyclist must be under the truck somewhere. We actually couldn’t figure out where he was because he just standing around so calmly.”

Adrian was shaken but almost completely unharmed. It was not necessary for an ambulance to be called and the Islington resident continued on to Guy’s Hospital, where he carried out a normal day’s work.

However he did say that the incident had “caught up with him” and called for road safety changes to be made regarding trucks in London.

He said: “Tipper trucks in rush hour are a real menace. For one thing the cabs are ridiculously high for driving in inner-city traffic. I pity the drivers, they can see very little.

“Can you really ban them? After all, the building industry needs to go on. But I think their speed should be limited to 20mph. It’s crazily high at the moment, you see some of them speeding along like buses. The current regulations are pathetic.”

No-one has been arrested in connection with the incident.

What on earth is the cyclist doing on the nearside of a hgv ? I think the cyclist should get prosecuted when will cyclists learn you pass or overtake any vehicle on the offside !!

yes- blame the cyclist or the city who put that cycling lane there? that blue bit on the road-that is a cycle lane, isn’t it?

How do you know the cyclist was not there first? Do u want to prosecute the dead ones too? Read the article. How can someone be allowed to drive a huge steel mountain like this with little visibility.
Read the article.

Because I drive a hgv in London every day and believe me 99% of cyclists pass me on the nearside and there is not one hgv driver that would make a left turn if the cyclist was there already. One of the reasons not one hgv driver has been charged after a cyclists death.You should ask someone in a hgv to take you out in London and then you would change your mind