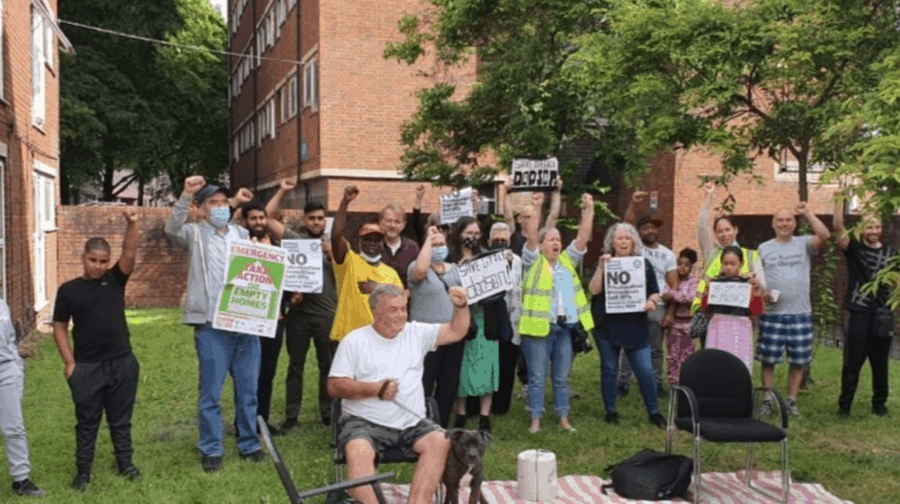 Protesters at the Dodson and Amigo estate

About 50 people gathered on a Southwark estate for a ‘picnic protest’ on Sunday against the proposed demolition of one of their housing blocks.

People on the Dodson and Amigo Estate want to prevent 49-56 Dodson Street – nicknamed Little Dodson – from being knocked down and replaced with eleven council flats. They argue that the six council tenants and one leaseholder currently living in the block should not have to move and the new building should be put up elsewhere. They say they have collected the signatures of 87 residents out of 135 homes who are against the project.

“He was talking to me,” Ms Gilmartin said. “I told him: ‘Let me just make one thing clear to you – we are not going away. You can’t just come in – this is a community, you can’t just rip the people in Little Dodson out of it.

“Before you start ripping estates wide open, you should do stock surveys. There might be people who want to downsize. Southwark should sit down and realise instead of going in all guns blazing. Who’s got what, estate by estate.”

“Anyway, it was a really good day but I’ll go on actions not words.”

The council is still in consultation regarding the site and expects to submit planning permission in autumn this year, according to a newsletter shared with residents.

The council’s newsletter says that 50 per cent of the new flats will go to “existing local residents in housing need”. Building work would start next summer and finish in autumn 2023, if everything goes ahead as planned. All six council tenants believe they have a right to return to the new building when work is completed, according to a note by the tenants’ and residents’ association.

The picnic was supported by local shops and restaurants, including a nearby branch of Krispy Kreme that gave out donuts. People from other estates came, alongside protesters from other groups including Extinction Rebellion – who argue that demolishing and rebuilding blocks is not environmentally friendly – and Southwark Defend Council Housing (SDCH).

Tanya Murat of SDCH said: “We want new council homes, but people’s homes, environment and facilities must be protected, and estate residents must be allowed to decide what is best for them. No demolition without permission.”

This was the second protest organised by residents in recent weeks, but Ms Gilmartin said it would not be the last and there are more events planned.