Dodson and Amigo: ‘Small victory’ as Southwark Council infill plan said to go back to drawing board 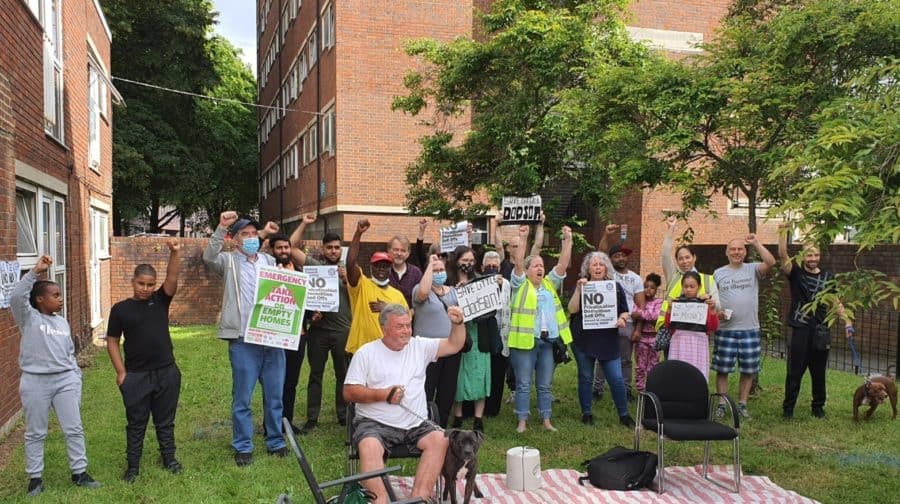 A protest held on the estate on July 4

Campaigners are claiming a “small victory” after they said Southwark Council took a controversial social housing infill scheme in Borough back to the drawing board.

An eight-flat building nicknamed ‘Little Dodson’ at 49-56 Dodson Street, between Blackfriars Road and Waterloo, has long been slated to be knocked down, alongside nearby garages to be replaced by eleven council flats.

Campaigners on the Dodson and Amigo estate say this would break up their community and claim to have collected 87 signatures out of 135 households for a petition against the new build.

The infill project, which had not reached the planning application stage yet, was one small part of Southwark Council’s plan to build 11,000 council homes by 2043 to tackle its 16,200-person housing waiting list.

The council previously expected to submit planning permission for a four or five storey block in autumn this year, according to a newsletter shared with residents. Building work would have started next summer and finished in autumn 2023, if everything had gone ahead as planned.

But campaigners say the council has now restarted the entire consultation process, with discussions with local residents to begin again in February next year.

“It’s a small victory for us,” said Jacquie Gilmartin, a long-term resident who leads the campaign group against the redevelopment. “At the end of the day, we’ve pushed them back.”

Ms Gilmartin said she would be putting forward a different plan in talks with the council. Her plan would retain ‘Little Dodson’ and build three extra flats on the garages site – which would result in the same number of homes as the current plan.

Southwark Council did not respond to a request for comment.

Southwark NewsNewsDodson and Amigo: ‘Small victory’ as Southwark Council infill plan said to go back to drawing board