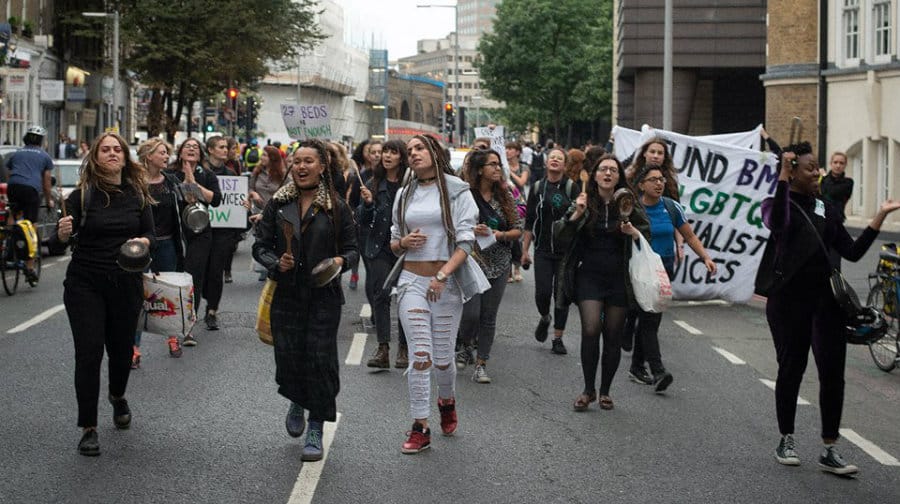 Domestic abuse campaigners have gained a meeting with Southwark Council after disrupting a meeting of the authority’s cabinet members with a flash mob.

The group of 30 women from pressure group Sisters Uncut rushed the council’s Tooley Street offices on Tuesday and staged a peaceful protest, chanting the names of 127 people who have been killed across the UK in 2015 by domestic violence.

Ayse Akmen told the News: “We wanted to make clear we are talking about the lives of women here.

“Every day the council does not act another woman will die at the hands of a former or current partner.

“We were there to mourn their deaths, and we managed to disrupt the meeting to the point that [council leader] Peter John had to speak over one of the sisters. Then at the end councillor Stephanie Cryan offered to meet and discuss this with us.”

The campaigners claim to have obtained data from the council through freedom of information requests, showing that up to 1,270 council homes in Southwark were at that time vacant. Also that Southwark has turned away 47 per cent of men and women who have approached them for housing after experiencing domestic violence.

Stephanie Cryan, the council’s cabinet member for housing, who has agreed to discuss the campaigners’ concerns with them in October, previously told the News that the figures “do not give the while picture”. She said: “We work alongside Southwark Advocacy and Support Service, delivered by Solace Women’s Aid, to support victims by helping them into temporary accommodation or providing sanctuary and security measures which allow them to stay in their own homes.

“All housing applications are assessed according to the person’s circumstances. Housing is in extremely high demand and vulnerable women who have children or are pregnant are prioritised, for example. We will continue to support all victims of domestic abuse in ways proven to be successful using the experience we have gained in years of tackling this emotive issue.”

The sisters group also held a demonstration in Rye Lane, Peckham, in June by taking over an empty shop for several days, and using it as a base to host talks and workshops about domestic violence and housing.