54 computers given to Peckham-based Thames Reach 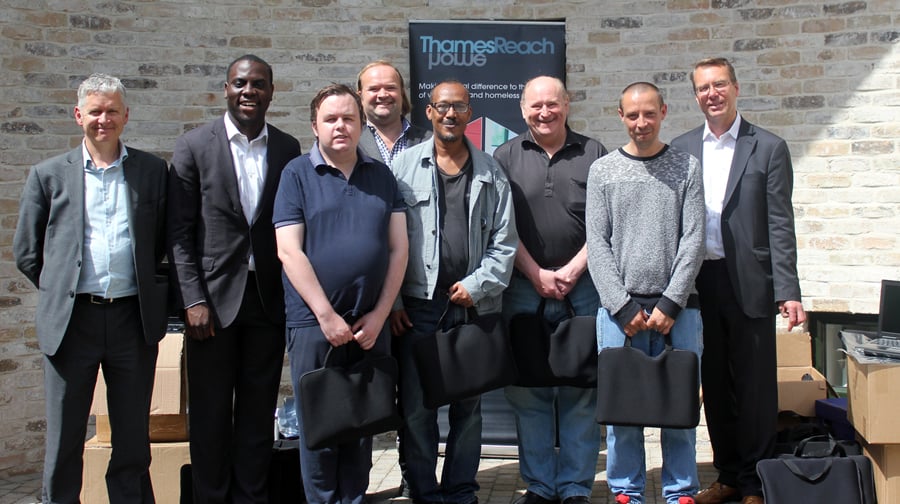 A 34-year-old man who spent years on the streets has told how a Peckham charity helped him turn his life around and find his first job.

Daniel Moment spoke to the News at the Thames Reach centre on Friday, during a presentation in which 54 laptops were donated to the charity’s service users.

For Daniel, who’s slept rough since he was nineteen, this was the first laptop he had ever owned. The service users given a roof over their heads with Thames Reach’s support housing will now find it “much easier to find a job”.

Daniel said: “I’ve never owned a laptop. I was relying on going to the library in Peckham before this. It will open doors for me – I can start emailing.

“I used to have so much trouble at the job centre. You would tell them you don’t have access to your emails and they don’t take any notice. And it’s difficult to apply for jobs without it when you needed to claim Employment Support Allowance.

“While I was homeless I had met people who had been on the streets for 20 or 30 years. I know people who had overdosed, people who committed suicide. Some people you get on with, some you don’t. That’s just the lifestyle.”

But Daniel said he had now been in work for two weeks, after a job in construction with McGinley on building sites in Blackfriars.

“When I was telling a few people at work I would be getting my first laptop, they actually couldn’t believe it. I’ve never had that before, let alone a proper phone or anything.”

The laptops were donated by SocialBox, a social enterprise which encourages companies to donate second hand computers to homeless charities.

Its founder, Peter Paduh, said: “We launched the scheme at another Thames Reach centre in Camden last year. We’re hoping to get 1,000 donated by 2020.

“We had donations from FTSE 100 companies, and small companies with just a few staff. You can donate spare laptops at drop-off points. We have one in Southwark which is in Camberwell Library.”

Thames Reach chief executive Jeremy Swain said the vast majority of their clients are enthusiastically looking for jobs, and the few who aren’t are usually aged over 60.

“People like Daniel have come a remarkably long way. What people need now in the 21st century is computer skills, and that’s what we’re aiming to do for our service users.”