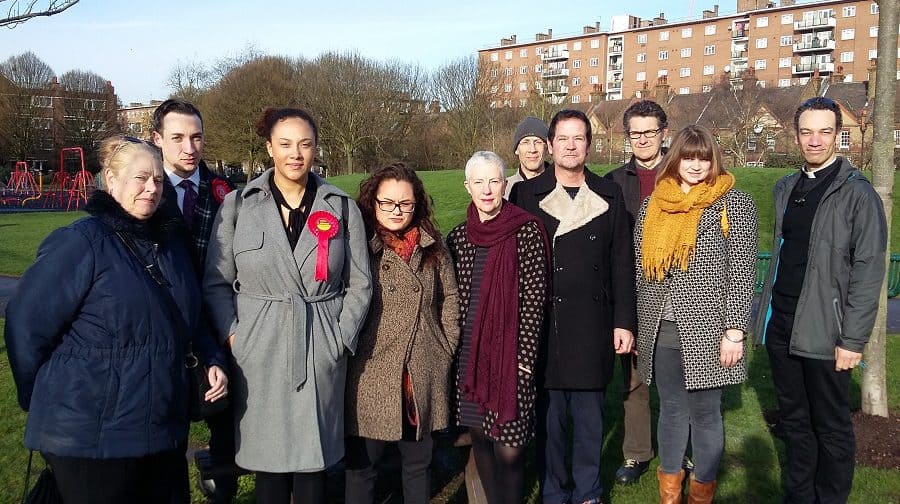 Walworth residents are lobbying Transport for London (TfL) not to plonk a giant ventilation shaft for the Bakerloo Line in Faraday Gardens.

But it also included plans for a ventilation and emergency-exit shaft in one of two locations: on top of the Faraday Gardens football pitch, or the Bricklayers Arms roundabout.

Labour councillor Paul Fleming said: “In Faraday Gardens it would be right by dense areas of houses, by the Walworth Road conservation area, and it would mean bringing construction vehicles on to the Quietway cycle path to be built in Portland Street.

“It would perhaps be tolerable if Walworth was getting its own Bakerloo Line station, which it isn’t.

“Whereas I don’t think anyone would cry any tears if it was built in the middle of the Bricklayers Arms.”

Shaft options A and B

TfL’s consultation papers, published on February 9, said the shafts would “provide ventilation, cooling and emergency access to tunnels”. “At the surface, a structure known as a head-house would be built that contains the equipment for the shaft to function,” it said.

It adds that ventilation shafts need to be positioned at an equal distance between stations, in order “to access trains parked in tunnels underground”.

Meanwhile there was also disquiet from residents living close to the Bricklayers Arms roundabout.

Peter Wright of the Bricklayers Arms TRA told the News he worried that years of disruption would follow, with heavy machinery being brought to the site and dust being put into the area during the construction. Peter said: “the roundabout is also a green space in itself that has been worked on by the local community.”

TfL consultation papers say that most of the shaft would be underground with an above-ground structure known as a ‘head-house’ of approximately 25 metres by 25 metres and to be at least two storeys high.

The News asked TfL for a response but did not receive a comment at the time of going to press.

Two more shafts would be built between New Cross Gate and Lewisham station, and at the end of the line in Lewisham. TfL has said it hopes to complete the Bakerloo extension project by 2029.