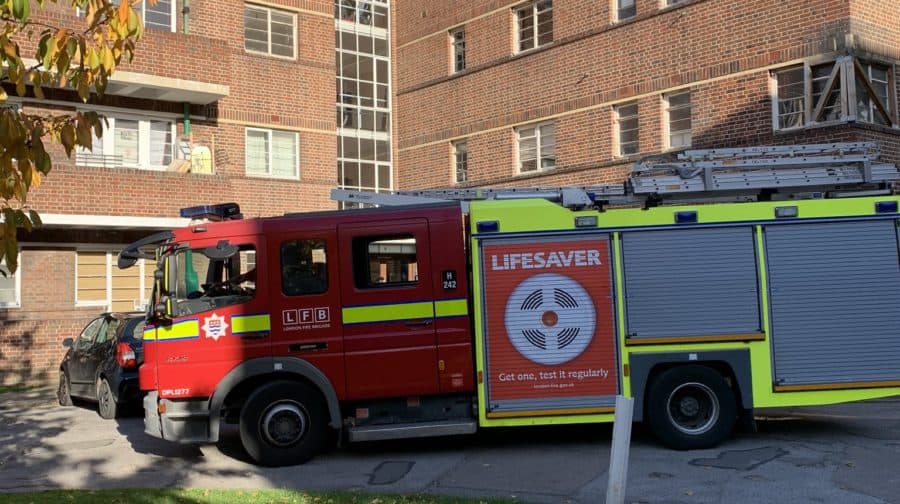 One person was hospitalised after a ‘massive gas leak’ in Herne Hill’s Dorchester Court on Tuesday.

A fire crew, paramedics and gas engineers were on site in the Herne Hill Road art deco estate after reports of a carbon monoxide leak from temporary boilers.

Residents say they could smell gas for days beforehand. Around 50 people had left the four-storey building before the brigade arrived at 3.11pm, with two rescue units from Lewisham and Euston stations.

They left at 4.48pm the same day after ‘elevated readings of carbon monoxide’ were found and then isolated by gas engineers in the communal boiler. A sweep of the entire building did not find any other leaks. 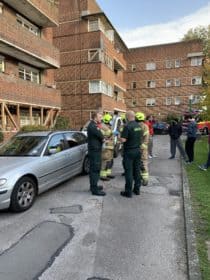 Gas engineers and emergency services outside the block on Tuesday, October 20

A London Ambulance Service spokesperson confirmed it had treated two people at the scene and taken one person to hospital, after being called at 3.01pm.

“We sent two ambulance crews, an incident response officer, a medic in a car and our hazardous area response teams,” a spokesperson said.

Pictures posted by residents online show a fire crew arriving and cordoning off the building.

“Property Partners were telling residents on the phone everything was fine at the same time fire brigade were evacuating blocks,” said a representative of Dorchester Court’s tenants union, which has been locked in a battle against the landlord over repairs for years.

The building is managed by Property Partners and owned by Manaquel Ltd; who deny claims by residents that they were not informed that there was a suspected leak.

Property Partners said SGN engineers arrived on site at 2pm, with the engineers in charge of the temporary boilers arriving at 3pm. They say the issue was fixed within two hours from that point.

In an email seen by the News, Property Partners told residents at 2.09pm that there was an ‘issue’ with the boilers but made no mention of a potential leak.

“We have just been advised by the consultants and the company appointed by them to replace the boilers that there is an issue with the temporary boilers which are currently supplying heat and hot water to the estate.

“This may lead to a partial reduction of service tonight.

“We apologise for any potential inconvenience and are working with the consultants and engineers this afternoon to come to a resolution.”

This was followed up three hours later – at 4.56pm – with an email outlining that the gas had been turned off due to a ‘potential’ leak and advising anyone feeling unwell to seek help; but did not explicitly mention carbon monoxide poisoning.

“We would like to update you that National Grid attended site earlier this afternoon after a report of a potential gas leak, and are still on site now,” the email explained.

“The boilers have been turned off as a result of this and checks are currently underway, this includes checking each block.

“Until the investigations have taken place and all deemed safe the heating system will not be turned on.

“I understand residents have reached out to the ambulance service in the meantime and therefore we advise that if anybody has been receiving the following symptoms to reach out to a paramedic for assistance – headaches, dizziness, nausea, vomiting.

“The gas supply to the estate has been turned off but we ask in the meantime for residents to ventilate their flats as best as possible by opening windows and doors to circulate fresh air flow.

“I will update you as soon as more substantial information has been relayed to me.

“Thank you all in the meantime for your patience and understanding whilst we carry out investigations.”

A London Fire Brigade spokesperson told the News: “Carbon monoxide poisoning symptoms can easily be confused with just feeling unwell, which is why CO poisoning is so dangerous, and so often missed.

“It’s really important to have a working carbon monoxide alarm in your home – fit them in all rooms containing solid fuel, gas or paraffin heaters.

“You can’t taste, see or smell CO fumes but it can kill in minutes.

“It’s a good idea to familiarise yourself with the signs of carbon monoxide poisoning, and learn what to do if you suspect someone may be affected.”