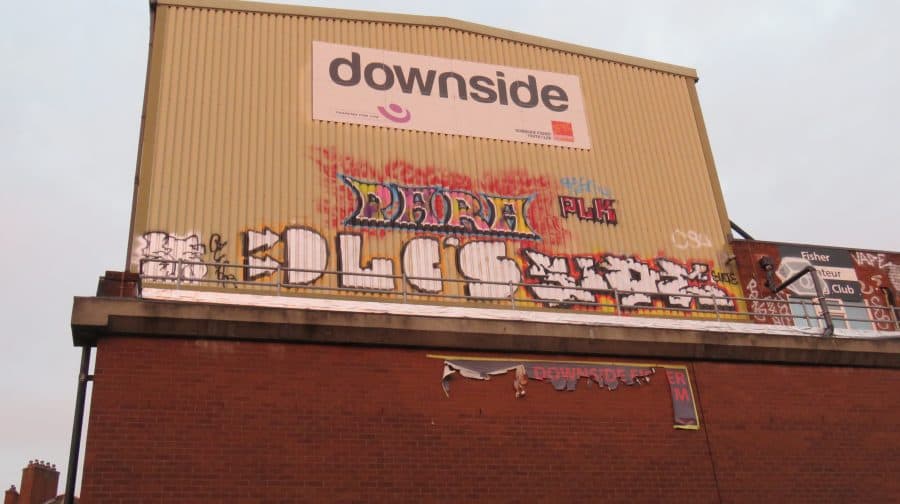 A Bermondsey youth club is facing a bill of several thousand pounds after being hit by a spate of graffiti – allegedly by middle-aged men with professional equipment.

Downside Fisher, on Tanner Street, has been graffitied four times over the past two months, with witnesses telling the club it was carried out by middle-aged men with a white van and a cherry picker.

The club, which is completely reliant on donations, was told that it would cost at least £2,000 to remove some of the earlier graffiti – and the bill for the later tags would be even more.

Phil Annis, the club’s Operations Manager, said: “In the past it’s been young people doing it. But now it’s a van and a crane, a cherry picker, going up there.

“Before they were just signing their tags, but now it looks professionally done.”

The operations manager has been told by the owner of a business opposite the club that at least one piece of the graffiti was carried out by four middle-aged men over the August bank holiday.

Mr Annis, 60, said: “He told me there was four blokes, in their forties to fifties, going up with a cherry picker on the back of a white van.

“He thought I was having work done up there, he actually spoke to them. So he didn’t think anything of it, he just ignored it. Downside Fisher’s Operations Manager, Phil Annis, said the spate of graffiti was taking away from the youth club

The graffiti has now begun to cover the centre’s signage, which the manager fears will take away potential donations.

Mr Annis, who has been volunteering at the club for thirty years, said: “Now we have to get a new sign to show we’re a boxing club again.

“A key thing is people say ‘we know who you are because we see you from the railway.’”

The sixty-year-old, who also organises the club’s outdoor activities, said the graffiti was taking away funds from providing activities for kids.

“I’ve got a trip on this weekend. It’s costing me £1,000 to take eight young people to the Peak District for the weekend.

“I was told it was something to do with an online game but I don’t know, I’m just guessing.”

Mr Annis said the council weren’t able to clean it off because it was too high, although they had previously addressed road-side graffiti. It has also been reported to the police.

Downside Fisher, which has been operating for 110 years, has to raise £300,000 to stay open for youngsters in the area, who they only charge 50p a night.

The centre wasn’t opposed to graffiti if it was professionally done and the space was rented for the artwork, he said.

In a message to the graffiti artists, the operations manager said: “People shouldn’t be doing this. Find somewhere else, rent a space.

“Give us an income from it. They could rent space off us, we’d rent it to them, if they wanted to do a proper bit of graffiti, and then come back every so often to re-do it.

“But only provided they don’t take away from who we are.

“But at the moment they’re taking away from who we are.”