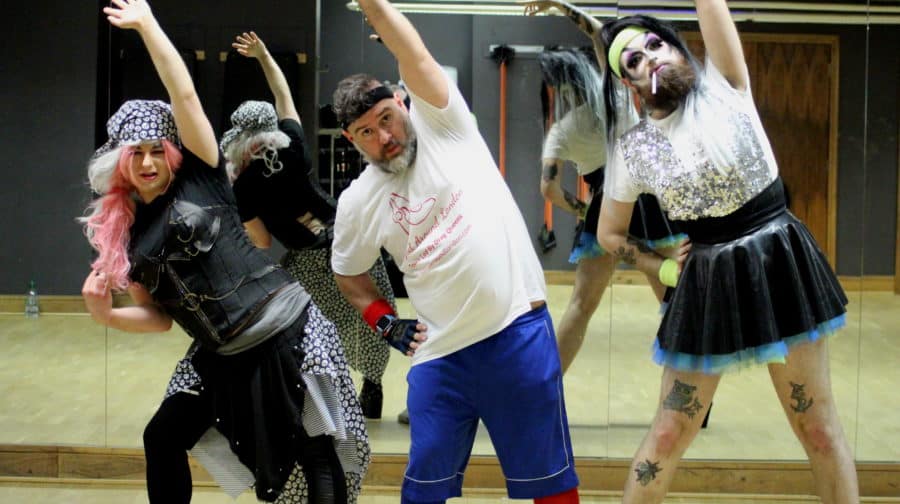 A new group fitness session at the Bankside Health Club has all the normal features of a group exercise class – alongside performances from a rolling cast of drag artists such as Mary Poppers, Bella U. Voyáge and Mayowa Monaé.

The ‘Drag Diva Fit’ sessions are a partnership between fitness instructor Jordan McInerny, 42, and Dragged around London, a company which runs “fruity and fabulous” drag-queen guided tours around the city.

“This idea came to me about two years ago, I come from New York where is drag is this huge thing. I just thought it would be great if instead of me making a fool of myself, it’d be great to have drag acts doing it instead,” Jordan says.

So far there have been three sessions of the 50-minute fortnightly fitness classes since it started in January, after a successful charity pilot event late last year.

The queens don’t always exercise themselves – “lip-syncing in heels is enough exercise for us dear”, says one – but perform lip-syncs in between exercises to pop ballads being played by Jordan and some of their own choosing.

“The best way to motivate people [during exercise] is to play really good music,” he says. “Jordan makes them do exercise, and we do whatever we want,” says Maneeta, who has been doing drag for around two years. In one class she led fitness fanatics in a Bollywood-style exercise, “like a Zumba class with Bollywood moves.”

“They prance around making people laugh. It just turns into one massive dance party,” adds the fitness instructor.

For non-class goers, the sight of a queen in heels confidently strolling through the gym can cause a stare or two.

“The people are loving it. It’s quite funny though, walking through the gym and seeing people on the exercise equipment look at you, it’s quite unexpected,” says Maneeta, who co-runs Dragged in London when not performing.

But the addition of drag artists in a fitness class has an advantage for the artists too, by bringing them into spaces they wouldn’t normally perform, she says.

“The great thing about the gym classes is that a lot of queer people have been bullied, so it’s a way of queering that space, making it feel safer for queer people.” Alongside the walking tours provided by Dragged around London, the fitness sessions also give chances for new acts to perform, away from overcrowded gay bars.

“It’s about getting drag queens into places they aren’t normally,” says Maneeta.

Tickets can be bought on the door for £10/£12 subject to availability, or online at www.draggedaroundlondon.com/dragdivafit/