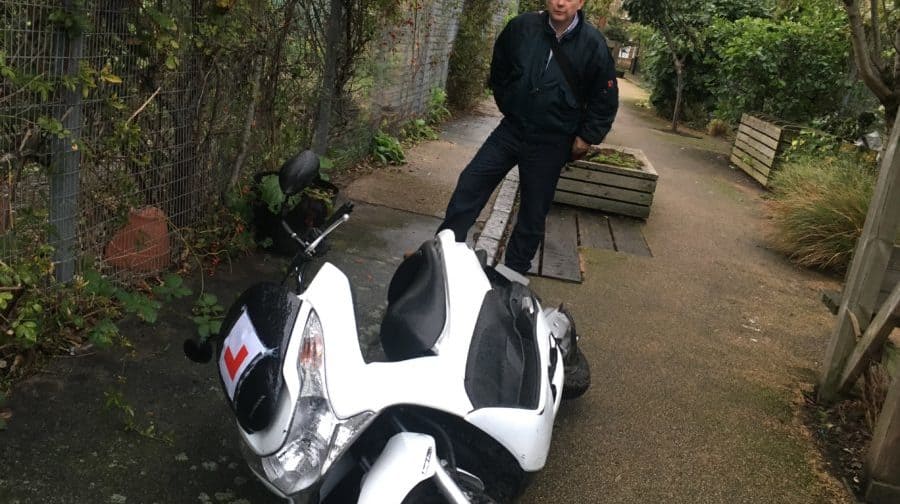 Grahm Neale with the recovered scooter

A Southwark Councillor staged a dramatic have-a-go-hero intervention after witnessing three youths attempting to steal a scooter – minutes after meeting with police about motorbike thefts in the borough.

Liberal Democrat councillor Graham Neale, from the Draper Estate, who represents St George’s ward and rides a Yamaha XS1100, spotted the would-be thieves pushing a Honda scooter at 2pm last Monday near his own doorstep,  in Lamlash Street.

Earlier that day he had met with Southwark Police to discuss improving motorbike security, as often stolen scooters are used in street crimes, especially phone snatches.

“As a biker myself so I’m well aware of bike thieves, and I took a second look at them and their faces. I turned round, and started to take chase,” he told the News.

“I didn’t have time to call 999 and take photos of the thieves. I thought as soon as they heard me calling the cops they would scarper.

“The young boys looked at me, and realised the game was up.

“I didn’t want to put myself or anyone in danger, so rather than getting stuck in, I just reached for my phone”

After being pursued for just a few yards they ditched the scooter and made a run for it.

Hearing the commotion, concerned residents ran out onto the Elephant and Castle street, with one saying he had seen a young man running round in search of his missing wheels.

The biker, a Deliveroo driver who had been on his lunch break, was fortunately reunited with the scooter.

According to the Met, more than 9,000 scooters, mopeds and motorbikes were stolen in London in the last year.

However, after increased awareness of thefts and a police crackdown, with Operation Venice, the number of thefts seen between July 2018 and June 2019 was down by a quarter compared to the same period the previous year.

Owners are advised to lock, chain and cover their bikes to help prevent theft.