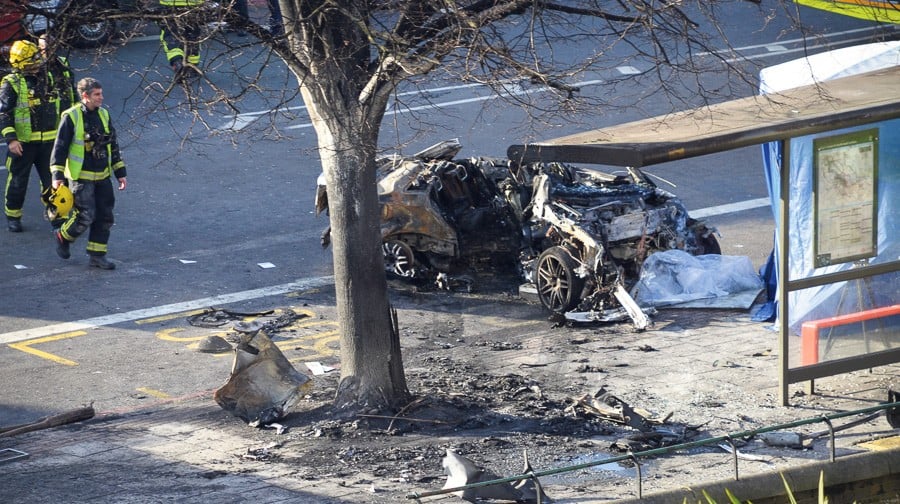 Media reports of gunmen on mopeds chasing down a father-of-two before his car exploded in a fireball death crash “hindered the police” in their investigation, according to a detective.

Speaking at Michael Paxman’s inquest today, Detective Inspector Brian Fitzpatrick, of Homicide and Major Crime Command, said there was “no sound basis” for reports of gunshots and possible foul play being involved in the death of the Rotherhithe electrician in the early hours of January 11 on the Old Kent Road.

He added that the coverage had been “distressing” to Michael’s family as his death became associated with crime and gangs, which also tends to put witnesses off cooperating with the police.

“When you put something in that kind of context, people are more reluctant to come forward and tell you what they know,” said DI Fitzpatrick at Southwark Coroner’s Court in front of Michael’s father and sister.

Assistant Coroner, Lorna Tagliavini concluded Michael, 32, had died as a result of a road traffic accident in which he was driving at “excessive speed” and was slightly over the drink drive limit.

CCTV footage showed his black Audi RS4 was not pursued by any other vehicle as it veered off the road into a bus stop and then a tree opposite the Asda store just before 2.30am.

Ms Tagliavini read out a witness statement from Adam Papadopoulos, who was walking to the bus stop with his girlfriend when Michael’s car collided with the tree.

There were three or four other people at the scene who looked at the flaming car in shock and asked each other “Is there anyone in there?”

Mr Papadopoulos saw another man trying to break in to the driver side of the car, possibly using a bit of debris from the crash, to try and free Michael from the burning wreck, but as further explosions occurred, everyone stood back.

The post mortem examination reported the cause of death as multiple injuries including burns.

Eye witnesses initially reported the sound of three loud bangs and the London Fire Brigade noticed “an unusual hole” in the driver side of the car, which led the collision to initially be investigated as a possible homicide.

Forensic examination of the vehicle determined the hole was “unlikely” to have been from a bullet and video footage from eye witnesses showed the bangs were from the car itself as it burst into flames.

The collision investigator confirmed Michael, of Rotherhithe New Road, had been travelling at between 71 and 80mph at the point of impact, but DI Fitzpatrick told the court the vehicle was going “considerably faster than that” as an oncoming car crossed his lane at a safe distance.

“No blame could be apportioned to that driver,” confirmed DI Fitzpatrick, who speculated that Michael swerved as he saw the oncoming car and then overcompensated as he returned to his lane and veered off the road into the tree.

Michael’s family, who did not speak at the inquest, consoled each other as they left the Coroner’s court.