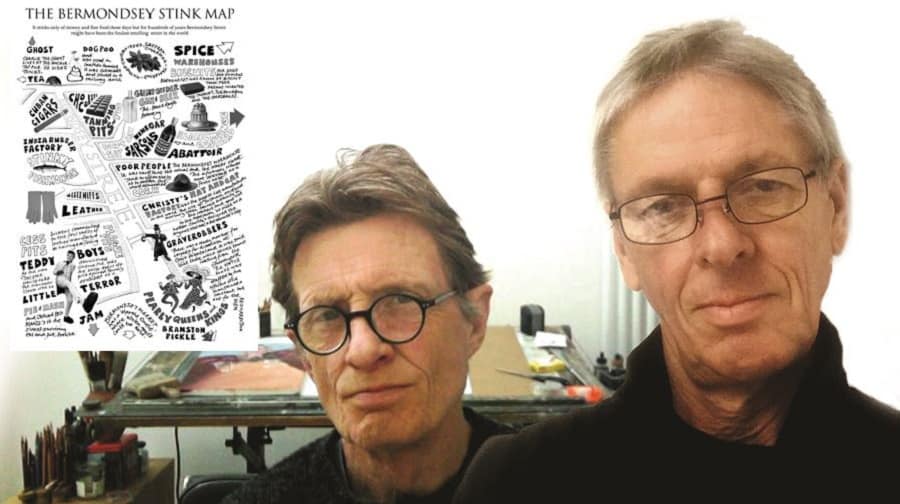 A map detailing the historical ‘stinks’ of Bermondsey Street has been created by an artist, writes Francesca Faze…

The Stink Map was created by Steve Overbury, 65,  an artist and designer from Dulwich, and details whiffs from the olfactory delights of spices from the area’s docking days, to the foul stench of dog poo used in its leather tanning past.

Steve moved to the area from Essex 40 years ago, around the same time as his design partner, Dougal Gordon. Dougal was looking at the origins of some of Bermondsey’s old buildings for his own series of drawings, which led Steve to start researching Bermondsey Street.

“I just got completely fascinated by all the industries that were here,” Steve told the News.

The city’s leather tanneries, where urine and dog faeces were applied to the skins to make them supple, were all huddled around the now-lost Neckinger River. Sarson’s Vinegar Factory, which only closed in 1992, an India Rubber works and abattoirs were also on the street, together with Christy’s hat manufacturers, where the use of noxious chemicals like sulphuric acid is thought to have driven the hatters mad.

The map shows some of the more fragrant factories that were in Bermondsey as well; Crosse and Blackwell’s Branston’s pickle was developed here; and down the road, Peek Frean made some of the country’s most well known biscuits.

According to the Rotherhithe and Bermondsey Local History Society, initiatives like Steve’s Stink Map help to give an alternative way to tell the history of the area which will appeal to different audiences and wider age ranges.

“The area of Rotherhithe and Bermondsey has a fascinating history, and many clues to its past are still visible, which encourages interest in what has gone here before,” says Society chair, Michael Reardon.

Steve’s Stink Map is one of several artistic projects set in Bermondsey that he has worked on together with Dougal.

To find out more go to: https://drawinglondon.weebly.com/store/c1/Featured_Products.html