'It was wet and cold, and a struggle' 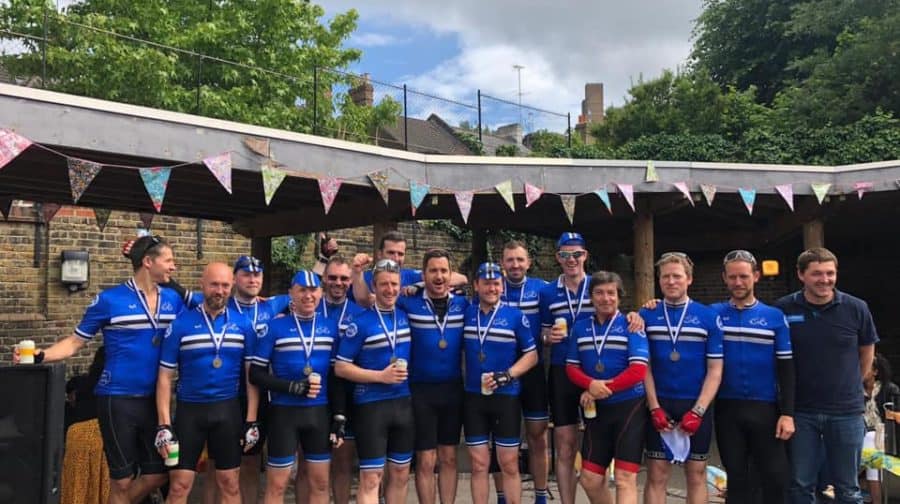 Fourteen East Dulwich dads have raised over £8,700 for their kids’ primary school in time for Father’s Day after cycling more than 320 kilometres in two days – and through torrential rain.

Their route took them from Goodrich Castle in Herefordshire on Thursday, June 13, all the way back to a hero’s welcome at Goodrich Primary on Saturday, where they arrived just in time for the school fair and a few well-earned beers.

The keen cyclist said the group of parents had been training for months in preparation for the challenge to help raise funds for the school. Although some are regular cyclists, only a few had completed comparable long rides before.

“From January we set up group rides every weekend throughout the winter so everyone could get used to riding with other people, and learn techniques like hand signals, riding close to each other, and build their road skills.”

Although the ride was a huge success, it was not without its challenges – not least a weather forecast that would have put many off.

After arriving in Herefordshire by minibus with their support team in tow and wearing their special kit in Goodrich colours, the group had time to enjoy a group meal courtesy of Dulwich-based Family Feasts, before the hard work started at seven in the morning the next day.

Riding through torrential rain, the group had only just arrived at their official starting point of Goodrich Castle, 5 km in, when they got their first puncture.

“I thought to myself we can’t do this,” says Matthew, “the conditions were so bad it was actually dangerous.”

Fortunately the rain eased off and, the puncture was fixed by Richard Balfe from Balfe’s Bikes, who was keeping everyone’s wheels in top condition throughout the trip.

Back on track, they completed the 191 kilometre first leg of their journey to Basingstoke, including conquering a 10 per cent incline into a med blog.

“It was wet and cold, and a struggle, but we kept at about 24 kilometres per hour,” said Matthew.

“It was hard, but when we arrived for our lunch at Stowe-on-the-Wold in Gloucestershire, at that point it was half way through the day and everyone was together and in good spirits.

“In the afternoon the weather got better and better, and the last few miles were glorious.

“It was beautiful across the Cotswolds, covered in poppy fields – but I’ve never been so pleased to see Basingstoke in my life!”

After a quick stay at a Premier Inn, the next day they were out by 8.30 am again, racing to get back to East Dulwich in time for Saturday’s school fair at 3.30 pm.

But first they had the mammoth Leith Hill and Box Hill to climb, and south London traffic to contend with, with Matthew saying they ‘came into their own’ as those well-honed commuter skills helped them get ahead.

The children, including Matthew’s nine and six-year-olds, had held a special assembly about the trip and were ready to cheer on the riders as they pedalled into the playground with no idea how many people would turn out to support them.

“When we turned onto Goodrich Road we could hear the kids who started to run down the road towards us. It was really emotional,” Matthew told the News.

The team have now smashed their initial target of raising £5,000, with more than £8,700 and counting for the school.

Matthew says beyond helping the school financially, he hopes the cycling group – Cyclists of Goodrich – which everyone in the school community is automatically a member of, will help get more kids and parents on their bikes.

“We have lots of ideas we’re talking about at the moment for things we want to do.

“Maybe a kids cycling festival, another long challenge, or smaller bike rides – it’s not just going to be a one-off.”

For more information and to donate, visit Cyclists of Goodrich’s Facebook page www.facebook.com/GoodrichCoG/