'These men served their country ... and resorted to targeting hardworking shopkeepers late at night' 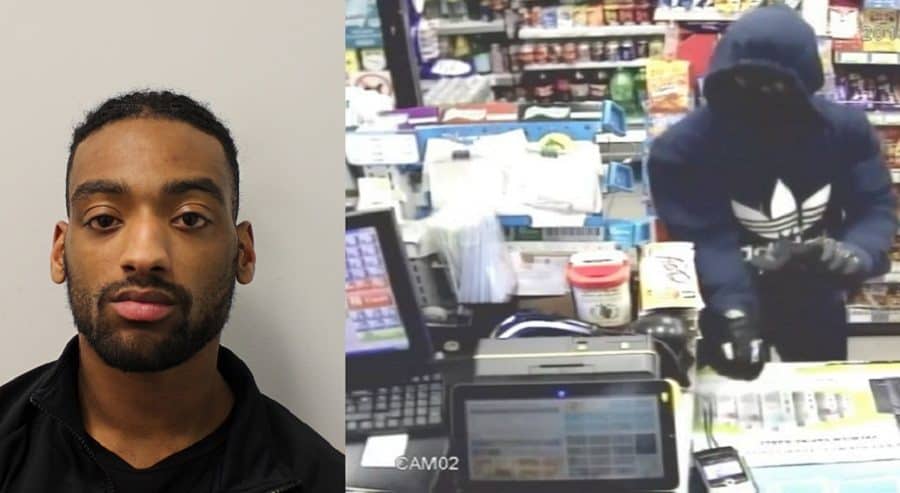 Left: Dillon Sharpe, right: Sharpe during one of his crimes (Images: Met Police)

A Dulwich soldier has admitted carrying out a series of armed robberies across south London and Surrey.

Dillon Sharpe, 23, from Dulwich’s Lovelace Road, confessed to twelve robberies, eleven counts of possessing a firearm with intent to cause fear of violence and to possessing a stun gun.

He had been a serving member of the Grenadier Guards.

Sharpe’s accomplice for one of his robberies, Elnur Bracegirdle, 21, of Chapel Lane, Preston – who also served the Armed Forces – confessed to one count of robbery and one count of possessing a knife.

Alongside the pair, another two men were found guilty on Thursday for their role in the terrifying crimes, which only came to light after Sharpe was arrested. Sharpe was a serving soldier from Dulwich

Kristopher James-Merrill, 20, of Clapham’s Lyham Road, and Marlon Wright, 25, of Grove Road, Mitcham, were found guilty of seven robberies and attempted robberies in which an imitation gun was used.

James-Merrill was also a serving soldier.

Police said Sharpe had initially committed four of his crimes on his own in February 2018, targeting shops in Tulse Hill among others.

He then committed a string of robberies with other defendants.

In January last year, Sharpe and Bracegirdle struck at a convenience shop in Brixton Hill in the early hours of the morning, wearing dark clothing. The court heard that Sharpe came to the side of the counter while Bracegirdle remained by the door, and threatening the cashier with a sparking stun gun.

As the victim noticed that Bracegirdle had a knife, Sharpe shouted: “Open the till!”

The fearful cashier opened the till and Sharpe began stuffing a blue carrier bag with notes from it.

After the pair fled the scene of their robbery, the victim called the police.

Officers rushing to the scene noticed two men who matched the suspects while on their way, who turned out to be Sharpe and Bracegirdle.

Bracegirdle was arrested shortly before Sharpe, who police said was still wearing the balaclava he used during the robbery. Also in Sharpe’s possession was the blue bag with a large amount of coins, gloves and the stun gun.

The pair were taken into custody and Sharpe was identified as being wanted for a series of earlier robberies.

“This case is both shocking and somewhat disheartening in that these men who were in positions of responsibility and trust – three of whom have served their country in the armed forces – resorted to targeting hardworking shopkeepers late at night,” said Detective Sergeant Jamie Witts.

Sharpe was revealed to have carried out seven robberies or attempted robberies with pals James-Merrill and Wright in July across Kingston, Wallington and South Croydon.

All the July offences involved the same firearm and the robber Sharpe wore the same blue hooded Adidas top with large logo on the chest. Sharpe during one of his terrifying crimes

Officers attempted to arrest accomplice James-Merrill at his barracks, but he was not there.

Knowing that he was wanted, he handed himself into police at Wandsworth police station later on 10 January 2019.

Officers raided his home address in Clapham and found the distinctive imitation firearm identical to the one used in the offences in his bedroom.

The magazine from the firearm was missing, tying into one being dropped at a robbery on 24 July 2019.

DNA from the victim of that offence was found on the firearm.

Wright was then also identified having entered two of the venues and walking past a third prior to the robbery taking place.

The prosecution case outlined his role in reconnaissance and acting as a point of contact for Sharpe to facilitate his escape.

James-Merrill was also revealed to have used his vehicle to drive Sharpe to and from the offences and also entered one of the venues prior to the robbery.