Dulwich families mount campaign against phone mast next to school 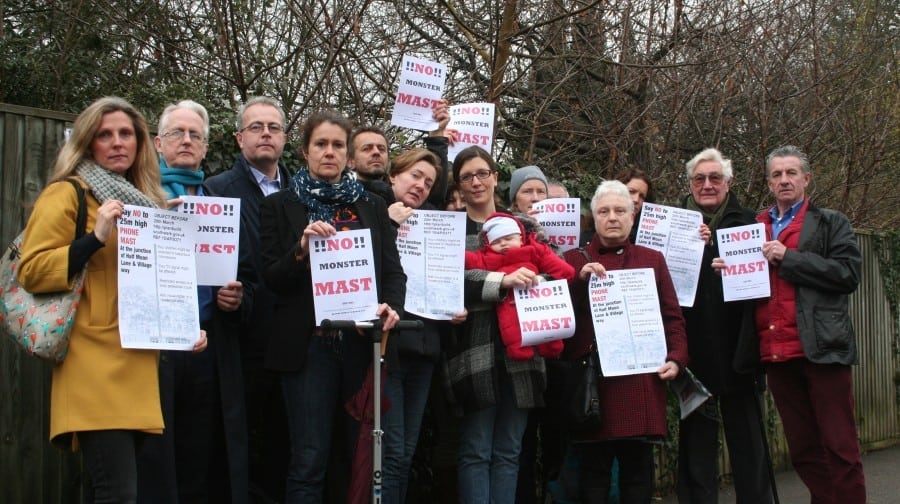 Protesters gathered at the site of the proposed mast

Concerned parents have said they are prepared to move if an 82ft phone mast is erected next door to a school and a nursery.

The “colossal” Vodafone 4G aerial is proposed to go at the junction of Half Moon Lane and Village Way in Dulwich, a designated ‘safe route’ for hundreds of children to make their way to the surrounding schools every day.

The proposed site for the mast, which would be taller than five double-decker buses, is next door to the Judith Kerr free school, overlooking the green space where the children currently play.

Chair of Governors, Peter Johnson, says the school was not consulted before the planning application was submitted and has formally objected to the proposal.

“We believe the council should follow its own policy on the location of mobile telecommunications equipment and take a precautionary view given the proximity to the proposed mast of a large number of young children for much of the day,” he said.

Local residents have formed the Half Moon Lane Action Group to object to the mast en-masse and have already galvanised support from local ward councillors.

Mother of two young children, Michelle Fairhust, 38, lives opposite the site but says she would be prepared to move if the plans went ahead.

“My children come down here on bikes and scooters along with all the other children. I’m nervous about the health effects if this goes ahead. I’ll move – I’m not taking the chance. I don’t want to take that chance with my children’s’ health,” she said.

Celia Roberts, 47, who lives in nearby Delawyk Crescent says she walks her two children to and from school past the site every day and is concerned there has not been enough research done into the long term health effects of the radiation emitted from such masts.

“We shouldn’t be made guinea pigs of,” she said. “I’m appalled that anyone could propose such a thing in a residential area.”

Aside from the health concerns, residents like Gareth Jones, who has lived in the house directly behind the junction for nearly 30 years, say the mast would also be “oversized and out of scale.”

Government legislation dictates that local authorities cannot take health concerns into consideration when deciding on where to place phone masts so the Half Moon Action Group are focussing on other issues like how the mast could ironically disrupt the mobile and Freeview signals in the immediate vicinity.

A spokeswoman from Vodafone  said: “We understand that some people have concerns about mobile phones masts in the community but without a signal from a nearby mast, the mobile phones and other devices that so many of us rely on simply won’t work.

“A mobile phone mast is low-powered and the coverage it can provide is limited – as little as a mile in a built up area, maybe two miles in the countryside so they have to be where people use their phones – where they live, work and travel.

“All our installations are designed to be compliant with precautionary guidelines designed to protect the public wherever they are in relations to a mast and the consensus of scientific opinion is that there is not substantiated evidence on any harmful effects within those guidelines.”

There have been around 200 objections to the planning application so far and the consultation period closes tomorrow.

You can support or object to any planning application by visiting  http://planbuild.southwark.gov.uk