The Champion Hill team will don special, purple kits in their match against Merstham FC tomorrow 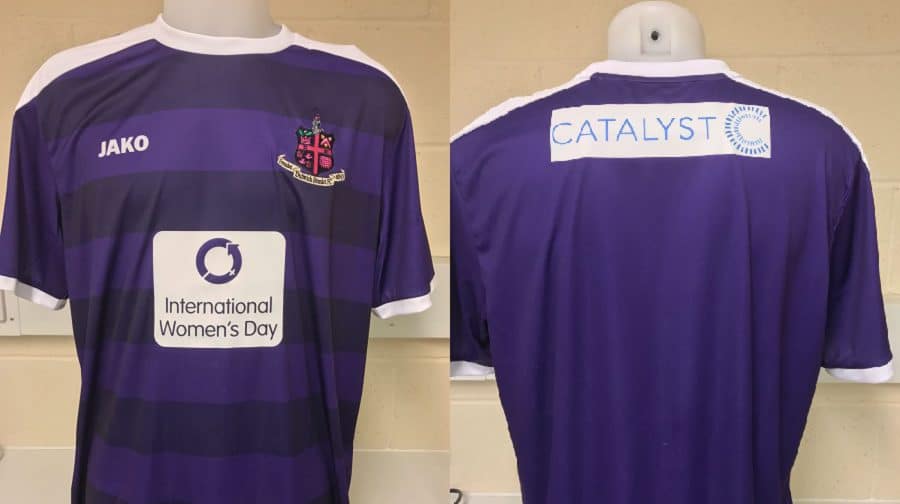 Dulwich Hamlet FC will be commemorating International Women’s Day (IWD) in their match against Merstham FC tomorrow by wearing a special, one-off kit.

The club has adopted the campaign’s #BeBoldForChange theme and swapped their trademark pink and blue strip for a purple one, the trademark colour used by the IWD campaign.

Club sponsors Kinleigh Folkard and Heyward have stepped down for the day to make way on the shirt for the logos of IWD’s charity partners Catalyst and the World Association of Girl Guides and Girl Scouts (WAGGGS).

Supporters wanting a souvenir will have the opportunity to bid for their own shirt worn by a first team player in a silent auction.

Fans with less to spend can also buy a raffle ticket, which will enter them into a draw for one of the sub kits.

“We wanted to do something to mark the day and bring awareness to the campaign,” said Dulwich Hamlet Supporters Trust Vice-Chair, Alex Atack. “If sport can lead the way in raising awareness then it should.”

“I’ve been a football fan for over 20 years. As a young female fan, I was very much a minority. But at Dulwich it’s not like that – being young and female is not a thing. I’m just one of the crowd.”

Club Chairman Liam Hickey said that he takes “great pride” that Hamlet has such a high proportion of female supporters.

“It is no coincidence that we try to be such an inclusive club, with a social conscience, so that anyone and everyone will feel welcome, regardless of gender, race, sexuality, age, ability or religion,” he said.

“I would like to thank the Ryman League for allowing us to wear a special one-off purple kit in support of IWD, and thank our main shirt sponsors, Kinleigh Folkard & Hayward, who have stepped aside to allow this to happen.”

The match will kick off at Champion Hill Stadium at 3pm on Saturday March 11.