'I honestly couldn’t be prouder of everyone that fought for this club. We won' - club director Tom Cullen 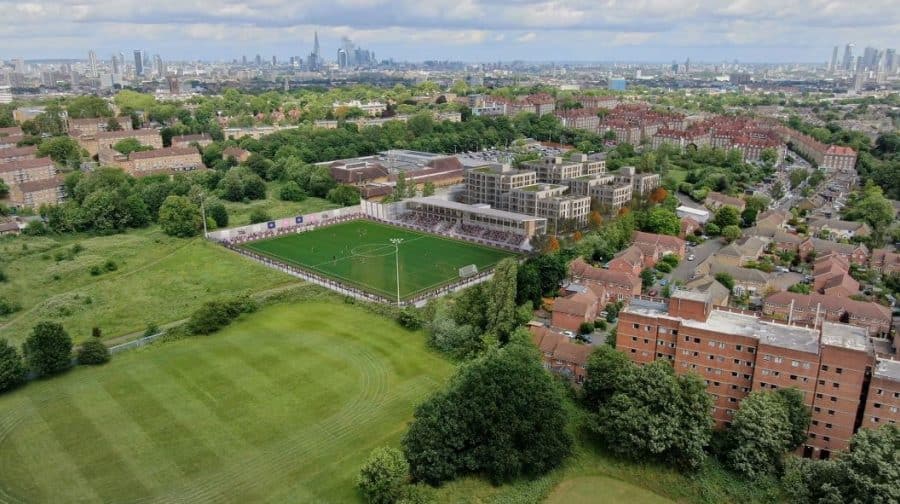 Dulwich Hamlet FC’s future at Champion Hill has been secured after plans for its new stadium were approved by Southwark Council’s planning committee last night.

In a statement issued shortly after the meeting, DHFC said: “The club are delighted to announce that the Southwark Council planning committee has approved our joint planning application with Meadow Residential.

“The result secures the clubs home and future in East Dulwich for the next 125 years.”

The decision comes after a long fight, although Hamlet’s supporter base has grown exponentially in the last few years, the plans were not without controversy – or vocal opposition.

Last week, in the run up to the vote, a mystery campaigner circulated leaflets claiming that if approved the club would be charging local schools £45,000 per year to use Greendale’s Astroturf – half a million over the next ten years.

The club responded angrily to the claims, branding them ‘disappointing’, ‘misinformation’ and ‘a lie’.

Ben Clasper, the club’s chairman, added: “Online and on paper a claim was made stating we will ‘charge schools’.

“It wasn’t true and needed to be refuted. This could have been avoided if the club had simply been asked.

“School use is free and we have reconfirmed this with the Charter Trust this week.”

Although the leaflets directed readers to the Friends of Green Dale website, the group has now confirmed it did not produce the material.

In a response shared with the News last Friday, a spokesperson for the campaigners said: “Friends of Green Dale have seen the club’s denial with regard to charging the Charter Schools for access to the proposed stadium.

“It is noted that the business plan submitted to Southwark planning portal includes charges against the Charter school of £40,000 to £50,000 per annum.

“The leaflet correctly cites the charges submitted to the planning portal by DHFC.”

We're disappointed to inform all that local groups have been spreading misinformation about the club in the lead up to our vital planning date on the 27th.

Leaflets have been circulated stating we're charging local schools half a Million pounds over 10 years.

Another group, Friends of Dog Kennel Hill Wood, took to Twitter to blast the club’s approach, saying promises to keep the Astroturf free for schools appeared nowhere in the formal planning documents.

“Calling local people ‘liars’ and discussing legal action for taking time to look through the 400+ documents and bringing important buried data to the surface is not what is expected of a club whose core values are all about community,” they argued.

Getting the green light for its new stadium is a huge boost to the club after a rollercoaster few years and has been greeted with glee by its ‘rabble’ of fans.

Before burying the hatchet and reaching an agreement about the club’s future, Dulwich Hamlet and Meadow had become locked in a bitter dispute that saw the club exiled from its own ground and even told it could no longer use its own logo.

Council leader Peter John even became embroiled in the drama when Southwark Council was forced to spend around £13,000 of taxpayers’ money investigating a series of tweets he made about Meadow, including one where he asked: “is this the most stupid development company in history or simply the nastiest?”

It took intervention from then sports minister Tracey Crouch to get Meadow and DHFC to finally reach an agreement before the planning documents were submitted in 2019.

As part of the deal Southwark Council agreed not to compulsorily purchase the Champion Hill site as long as the terms of the club’s new lease were fair.

On Monday night, in front of the committee, Cllr John spoke against the development, coming out in favour of protecting Greendale.

Describing the issue as ‘finely balanced’, along with Cllr Sarah King he argued that Greendale and its Astroturf – designated metropolitan open land – should be protected.

In response to the committee’s decision, Cllrs John and King told the News: “We are disappointed that planning committee has approved this application.

“Although we are long term supporters of Dulwich Hamlet Football Club, we are concerned about the loss of metropolitan open land at Green Dale and the impact this will have on our community.

“During lockdown it became clearer than ever before how important open spaces are, especially in a ward like ours with no major parks, so we are disappointed that this application means less green space for everyone to enjoy.

“We now call on Meadow to keep their promises to the community and ensure a stable future for DHFC at Champion Hill, and wish the club every success when the National League South returns.”

The planning committee meeting, roughly five hours long, eventually weighed in favour of the application for the new, 4,000 capacity stadium and 219 homes on the site with a vote of five in favour and two against.

It will be a huge boon to the club which has had a hole blown in its finances due to the pandemic suspending its season early.

During the pandemic, chairman Ben Clasper told the News the club’s financial forecast had turned from £100,000 in the black to £200,000 in the red since March.

In the meantime, its supporters will be celebrating. Club director Tom Cullen tweeted: “I honestly couldn’t be prouder of everyone that fought for this club. We won.”

Here are some more reactions:

Congratulations to @DulwichHamletFC. There's so much incredible history at Champion Hill – here's to another 125 years! #DHFC https://t.co/y8rwGXUcZE

Dulwich Hamlet, my first football love, announce that the Southwark Council has approved their joint planning application with Meadow Residential. The result secures the club's home and future in East Dulwich for the next 125 years. Tears in my eyes.

Lets take a few days to think about where our community goes from here!

There will be a lot of in your face celebrations, but lets think about how we can best represent the users of our Green Dale.

We are a great community that the club cannot ignore!

A great victory for @DulwichHamletFC. A vital asset to the local community. Big up all involved over the past few years.

Taking a minute to think of Mish & what this would have meant to him. Much of his work influenced the groundswell of support for the new ground.

Our friends at @DulwichHamletFC have worked so hard for this. So pleased that this new community 3G pitch and stadium can now be built.#MenaceLifeAintEasy, but for #dhfc it has been an incredibly tough few years.

The morning after it still feels great. Think there's a strip of carpet in the club that is now worn out. A penalty shoot out has nothing on the tension last night.