The match against FC Assyria will take place on March 9 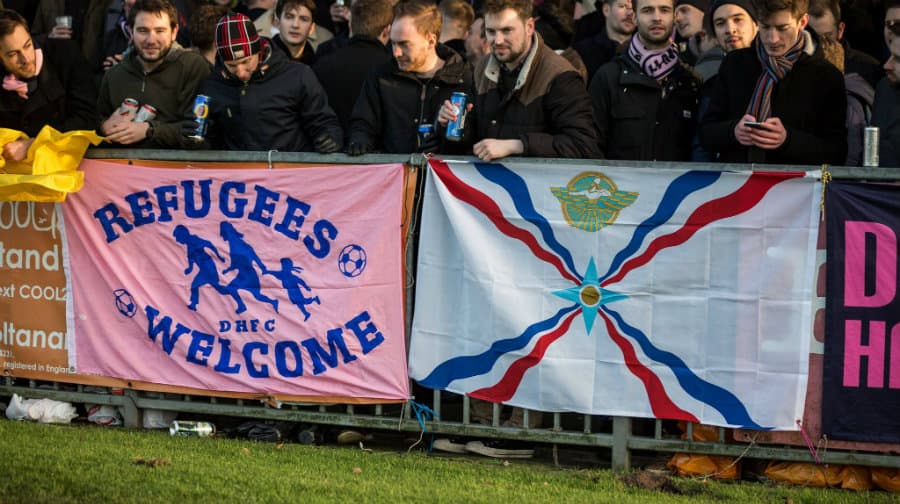 Dulwich fans with a pro-refugee banner and an Assyrian flag at a recent match. (Photo: Duncan Palmer)

Dulwich Hamlet will take on an Assyrian team in a charity football match next month, with all proceeds going towards providing aid in the ongoing refugee crisis.

The fundraising fixture on March 9 will see the blue and pinks face off against FC Assyria, a north London-based team made up largely of Assyrian players of Iraqi descent.

Every single penny raised will be split between the Southwark Refugee Project and the British Red Cross Syria Appeal.

“This is a great way to raise money and awareness,” FC Assyria manager Ramsin Isaac told the News. “Most of our team have been living in London for ten or fifteen years, but we have a synergy for the place and it is heart-breaking to see it all happen.

“Assyria is being destroyed in front of our eyes – we are seeing systematic annihilation by ISIS. It is especially hard for our players who still have family over there.”

The club, which was founded in the 1960s, has spent most of its existence in the lower leagues before a recent surge up the footballing pyramid.

Ramsin said: “This match against Dulwich is the biggest, toughest, highest calibre team we will have ever played. Playing in a stadium in front of lots of people, the players are all asking me who will get to play! Dulwich have been great. I have seen photos of their matches and they already have an Assyrian flag up at the ground. It’s great to see, we are all really looking forward to the game.”

Mishi Morath, responsible for Community Initiatives on the Dulwich Hamlet Football Committee, attributed the club’s growing attendances to their involvement with politics and the local community.

He said: “It’s such a simple idea, to play a friendly against a lower-level side, and donate all the money to something worthwhile, such as this. It ticks all the boxes, helping both refugees who have settled locally, and continues the humanitarian efforts that our fans clearly care about.

“Some in football think our fans might bring too much politics into football, but it’s not about that. It’s about doing the right thing, and the local community in East Dulwich, Southwark and beyond clearly agree, if you judge our work with the crowds that are currently coming through the gate.”

The match will be played at 7.45pm on Wednesday, March 9 at Dulwich Hamlet’s Champion Hill Stadium. Tickets are reduced to £5 for adults, £2 for commission and free for under twelves for the game – although there will be opportunities for charity donations.

Dulwich fans in the ever-raucous Toilets Opposite Stand at a recent match. (Photo: Duncan Palmer)