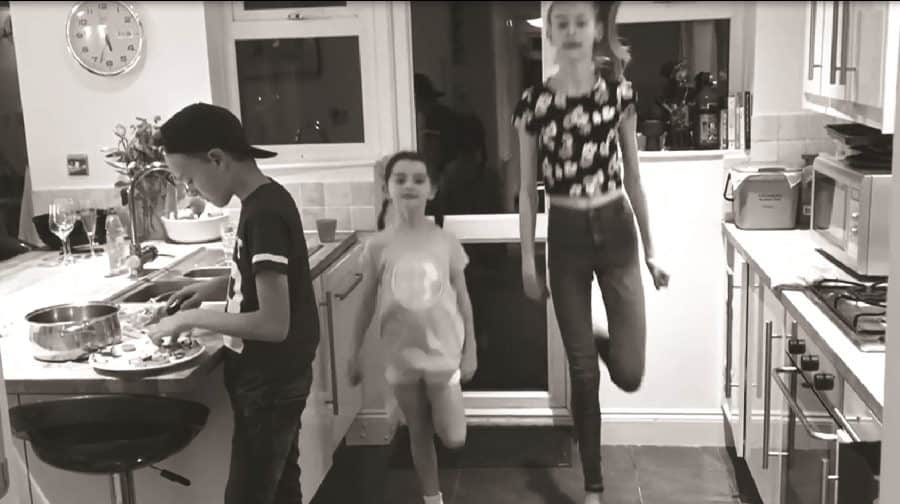 Orla, thirteen, Aoife, eight and Finn, eleven, star in the supermarket giant’s latest ad campaign #fooddancing, which features a montage of “real people” having fun, dancing and cooking in their kitchens.

Mum Fiona Christmas filmed her kids and submitted the video back in October – but the family didn’t learn they’d made the final cut until they saw their faces beaming out from the screen on live TV.

“When it came on the TV we just stood there and screamed and screamed!” said Fiona. “We knew we’d been chosen for the internet version, which is longer and with more people. We didn’t know we’d made the final cut for TV though! The kids were over the moon!”

Sainsbury estimate that they looked at about 250 entries, with just 34 making it into the 60 second TV ad.

Fiona learned about the competition via her lindehop teacher husband, who saw an ad from a casting agency on his Facebook.

They submitted a one-minute audition tape, which showed the girls – who train at Deborah Whelan Dance in Dulwich – Irish dancing and Finn next to them chopping carrots.

They were invited to submit a second video, this one three minutes long but “doing exactly the same thing.”

“I was so excited to see the ad,” said Fiona. “The kids were just over the moon.”

Orla, Aoife and Finn in the kitchen

Orla has been training at Deborah Whelan’s since she was four years old and Aoife “since she could walk.”

“They absolutely love it,” said the proud mum. “They love Deborah and they love the other kids there.”

While the girls love Irish dance, Finn is a keen musician and plays guitar.

Fiona said that Orla has recently been out of action dancing due to ill health but “seeing the TV ad has given her a real boost again.”

Dance teacher Deborah, who’s danced with Michael Flatley, said: “I’m absolutely delighted for the girls. It’s great that they had the opportunity to showcase their talent and that Irish dancing was even a part of the advert. We are all very proud of the girls.”

*?Students from Deborah Whelan Dance are performing at Surrey Quays shopping centre on Saturday, February 11 at 1:30pm (in front of The Range). The dancers are performing their latest routines and fundraising for the school’s upcoming competitions: the World Championships in April, held in Dublin, and the North American National Championship in New Orleans in July.  www.deborahwhelandance.com