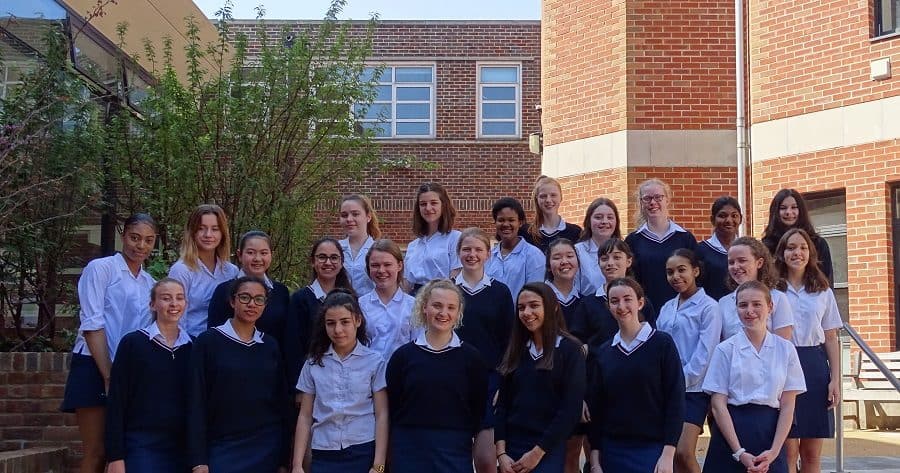 James Allen’s Girls’ School are celebrating an outstanding 92 per cent of pupils achieving an A* or an A, writes Jessica Aszkenasy…

Seventy-five per cent of all GCSE results were A* or equivalent and 56 per cent of all grades achieved were at the new top grade of 9 in the reformed and more rigorous courses.

Twenty-four girls earned A*s or equivalent in every subject they sat.

Maths grades were particularly strong with 98% of grades ranging between A* and A.

Sara Glover, who steps down this year as head of maths, said: “The maths grades achieved by year 11 are simply amazing.

“This success doesn’t happen overnight, but is the result of a five-year plan and very much a team effort.

“I am especially thrilled for our pupils who worked so hard, they did all we asked and more.

“I cannot think of a better way to end my 22 years as head of maths.” Sara Glover, Head of Maths, is stepping down this year

Head teacher Sally-Anne Huang said: “It’s not often that a head teacher is lost for words, but I am unable to express how proud I am of our pupils and staff.

“To achieve these results at a point when GCSE’s have been more testing and rigorous is an indication of what JAGS girls and teachers can do, and I am extremely excited to see what they achieve in the sixth form.”

Charlotte, who achieved five nines, six A* grades and the top mark in advanced maths, said: “I’m very happy with my results, which I put down to the great teachers at JAGS and hard work.

“I’m excited to be going on to studying A Levels in maths, further maths, chemistry and Latin in the sixth form at JAGS.”

Juliana is celebrating achieving seven nines and three A* grades.

She said: “All the girls were nervous about the reformed courses, but the teachers gave excellent guidance and made it a positive experience.

“I am overwhelmed and relieved by my results and will now study maths, further maths, chemistry and physics in the sixth form at JAGS.

“My ambition is a career in science, technology, engineering and maths and this has helped motivate me to work hard and I am delighted with my grades.”

Lilliana, who is celebrating seven 9’s and three A*s, said: “I am relieved and even surprised by my GCSE results, and I am also really pleased for the teachers who worked so hard on our behalf.

“They gave us a real sense of what to expect and how to revise.

“I found the revision tough at first, but after lots of practice I have the hang of it now.

“I will study A Level maths, further maths, physics and music in the sixth form at JAGS and am excited to continue participating in the school’s music ensembles and choir.”