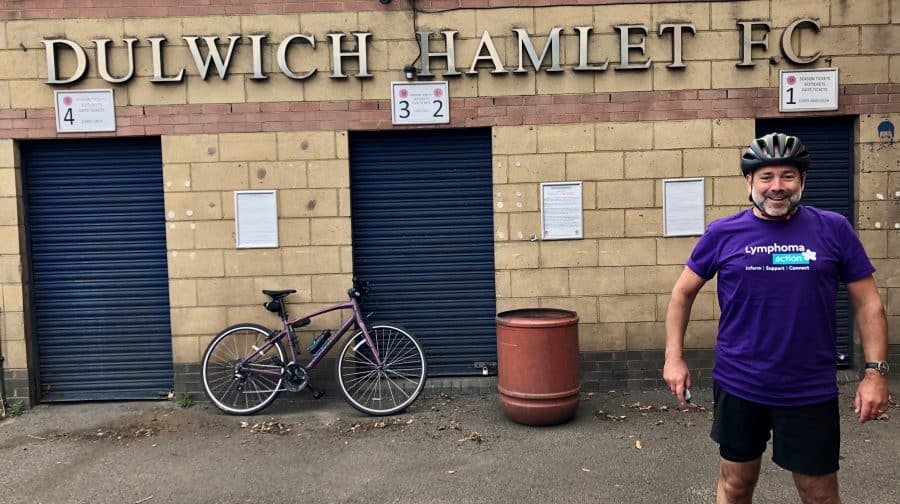 A West Dulwich man who was hospitalised with cancer will tour thirteen London football stadiums to raise money for the UK’s only lymphoma charity.

Hugh Porter, 50, will be cycling around the stadiums with a gang of friends on Saturday to fundraise for Lymphoma Action, with the final stop at Dulwich Hamlet.

Hugh, a production editor, was rushed to hospital last year with a five centimetre tumour in his brain.

After surgery at King’s College Hospital, and a further operation for a stem cell transplant, the cancer went into remission.

Now the 50-year-old hopes his ‘Round the Grounds’ cycle tour will help Lymphoma Action, which has suffered a catastrophic fall in funding because of the coronavirus lockdown.

“I was about to have a big party for my fiftieth, but then I got struck down with lymphoma,” he said.

“I did go to my GP, I was throwing up, I had double vision, but I don’t think it was anything bad.” After a trip to an emergency department after taking a turn for the worse, the Dulwich resident was taken to King’s College for surgery to remove the tumour.

“I had a hemorrhage, there was pressure in my brain from the tumour growth, but luckily I guess that was a sign that something wasn’t right.

“That was last August. It’s been a difficult time, and I’ve been in and out of hospital with the chemo and stem cell transplant.

“Now I’m focussing on just building my strength back up. This sort of journey is now coming to an end.” Hugh chose a bike ride around south London footie stadiums with friends after passing several of them during lockdown cycles.

People can donate to the charity by searching ‘justgiving.com/team/Round-the-Grounds’ or ringing the Lymphoma Action fundraising team on 01296 619419.