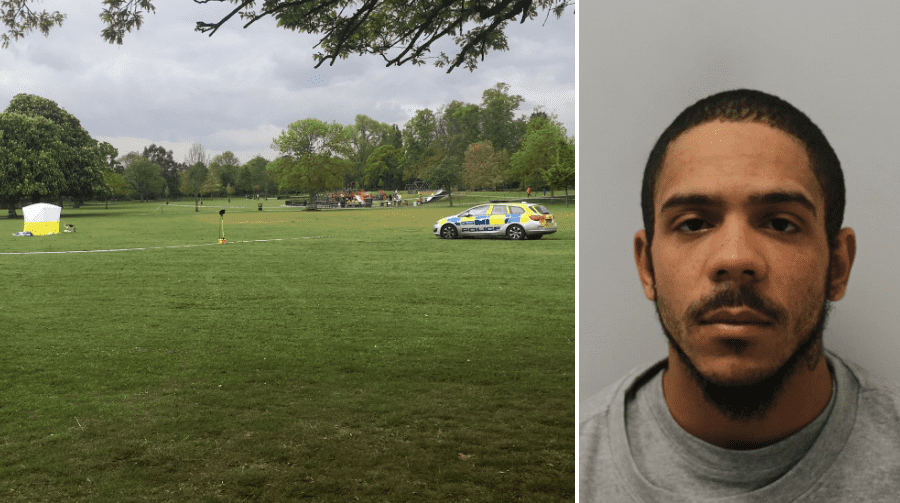 A mugger who left a dog walker fighting for his life, after he stabbed him in the head with a screwdriver in Dulwich Park, is facing years behind bars.

Jermaine McDonald, 26, leapt off his bicycle and launched a vicious unprovoked attack on Italian furniture designer Sinuhe Pianella, 31, in Dulwich Park on April 27.

Mr Pianella was taking his Spaniel puppy Pinot for a walk, and was sitting on the grass chatting to Marilena Stracke, when the thug demanded his wallet and phone.

When Sinuhe tried to fight off his attacker, he was stabbed in the head and chest and airlifted to hospital where he spent six weeks in intensive care at King’s College Hospital.

Ms Stracke offered her handbag containing cash, cards and keys to the mugger, who used them to buy a litre bottle of Bacardi and cigarettes at a nearby Co-op in Forest Hill.

McDonald was arrested on April 30 when officers recognised him from CCTV using the cards at the Co-op.

Prosecutor Deepak Kapur said McDonald struck “significant and substantial blows to incapacitate”, and had been riding around the park looking for a victim.

“On the 27 April Mr McDonald, we say, for at least an hour or so before the events in that park, had been riding around looking for a target,” he said.

“Having found his target, Mr Pianella and thereafter Ms Stracke, he did within minutes what he had always intended to do.”

McDonald claimed he was acting in self-defence after he went to speak to the pair and got a “funny look”.

But a jury of eight men and four women rejected his version of events and took four hours to convict him, after a week-long trial at Inner London Crown Court.

As the jury foreman delivered the unanimous verdict, McDonald slumped to his seat and sighed.

Judge Stephen Kramer QC said: “It is clear to me that I should need to see a pre-sentence report on the question of dangerousness.

“I would not imagine anyone would argue against that, the only other question on my mind is whether I need to read a psychiatric report after this unprovoked attack.”

“You will be back here on the 17 November, the likelihood is that you will be receiving a significant custodial sentence.”

McDonald, of no fixed abode, admitted one count of theft.

Since the attack, Sinuhe’s partner Emily Hobday, and her brother Jack Hobday, have led a fundraising campaign.

They have so far raised £13,000, which will all to go King’s College Hospital, where Sinuhe was treated and cared for.

After the hearing, Jack told the News Sinuhe remains in rehab with paralysis in the right side of his body, and some memory loss, and that his injuries have “changed his life”.

Fundraising events have included a walk around Dulwich Park in July. And in September, Jack’s brewing company Anspach & Hobday (in Druid Street, Bermondsey) launched a new beer named after Sinuhe.

Visit http://uk.virginmoneygiving.com/fundraiser-web/fundraiser/displaySomeoneSpecialPage.action?pageUrl=sinuheKCH to make a donation.

Sicko.
They should make this demons like hell.but the UK law is a joke.