“At the moment, this school is just about managing to balance its books, but only just. Any cuts would definitely mean losing staff, starting straight away. This school is already topped up by parents’ fundraising,” parent said 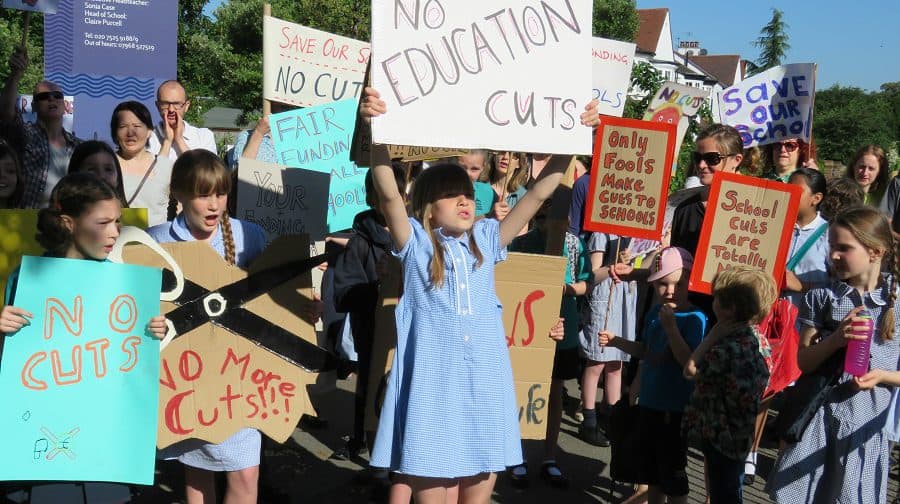 Parents from Dulwich and Peckham took part in a ‘national day of action’ to protest against the government’s proposed changes to school funding on Friday.

Research from five trade unions, including Unite, Unison, and the NUT, suggested Southwark schools would be worst-hit in the country by the government’s proposed “fairer funding formula”, which aims to even out the funding gap between rural and inner-city schools.

The research showed that schools in Bermondsey and Old Southwark would likely lose £1,051 (fifteen per cent) per child over five years. While schools in Camberwell and Peckham would lose £1,003 per pupil.

Schools in the borough could also face a double whammy if their funding isn’t topped up to meet increasing demand from population growth, and pressure from rising inflation.

The day of protest, organised by the ‘Fair Funding for All Schools’ campaign, began with a gathering outside Dulwich Hamlet Junior School, attended by parliamentary candidates for Dulwich and West Norwood: Gail Kent (Liberal Democrats) and Helen Hayes (Labour).

At the end of the school day parents and pupils marched from Dulwich Hamlet Junior School to Brockwell Park, passing Dulwich Village Infants, Judith Kerr Primary, the Charter School, and Rosendale Primary along the way.

Parliamentary candidates for Camberwell and Peckham also joined a protest march to Peckham Rye Park, where parents and kids held a picnic and poster competition.

A statement from Southwark Fair Funding for All Schools said: “Southwark’s schools are incredibly successful, with 93 per cent of schools being rated good or outstanding by Ofsted, and Southwark is above the national averages for Key Stage 2, GCSEs and A-Levels.

“The planned cuts would make it much harder for schools to continue to deliver a first class education for children in Southwark. Southwark Fair Funding for All Schools believes that our children deserve the best start in life – and that includes the best education.”

Labour has pledged to improve school funding with a £5.6bn package, while the Lib Dems have promised £7bn.

The Conservatives’ election manifesto has pledged to increase the overall schools budget by £4bn by 2022, “representing more than a real terms increase for every year of the parliament”.

Sara Rayment, who organised the protest, said: “My daughter goes to Dulwich Hamlet. They’re set to lose £1,200 per pupil, which will have a massive impact.

“How do you deal with that? You reduce staffing costs. If a teacher is retiring, they won’t be replaced.

“Things like intervention groups and extra circular activities have to be paid for. This is a school that believes in school trips, and giving kids experiences. But that will have to go.”

Andy Skipwith, a governor at Dulwich Hamlet Junior School, said: “At the moment, this school is just about managing to balance its books, but only just.

“Any cuts would definitely mean losing staff, starting straight away. This school is already topped up by parents’ fundraising.”

Rosalind Archer, who has children at Dulwich Hamlet Junior School, said: “At a private school the funding equals £6,000 per pupil. My children get £4,000 each, and the cuts would mean reducing that to £3,500. How can children at this school be worth so much less?

“At Charter School they stand to lose £1m per year. How would they afford to replace computers, or plug holes in the buildings when they need to?”

Quick factual correction: private schools cost c. £18,000 per year (£6,000 a term). Current state school funding is £4,000 per year and set to decrease to £3,500. Just wanted to clarify the comparison made here. Our local school here is going a FANTASTIC job with funds available but the reality that is there’s no room to decrease state funding any further without seriously compromising the quality of education they can provide.