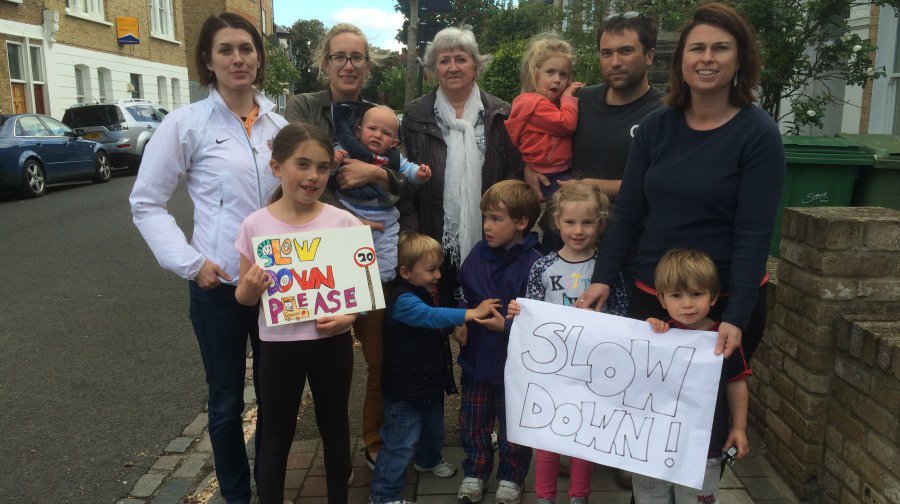 Residents of Melbourne Grove who campaigned for improvements to road safety.

Worried Dulwich residents whose quiet street has been turned into a ‘rat run’ by speeding cars have urged the council to take action before someone is hurt.

Over 100 people living in Melbourne Grove have signed a petition calling for action, with the number of drivers using their road as a speedy short-cut to Lordship Lane growing every year.

Traffic statistics analysed by Southwark Living Streets, a charity championing pedestrian rights, revealed that over half of all cars using the road are breaking the 20mph speed limit, with 3.1% even driving above 30mph.

Kim Pockock, a resident of the road for 20 years, said: “There are a lot of young kids and elderly people around here but the cars don’t slow down for anyone. It’s so dangerous.

“I have an autistic son and all it would take is one misstep while I am helping him into the car for him to be badly hurt. We need to squeeze against the door when cars go by or else you’d lose the skin off your back.” Residents argue that a number of easy measures could be taken to make the road safer for pedestrians, including introducing full-width speed bumps or closing off the road at a certain point.

The issue has received support from East Dulwich councillors, including Labour’s Charlie Smith and the Lib Dem’s James Barber. Cllr Smith stressed: “We introduced 20mph speed limits for a reason and breaking them is not a minor issue. A child hit by a car at 30mph or even 25mph is in a lot more danger than one hit at 20mph.” Cllr Barber said: “The benefits of less speeding traffic goes beyond road safety – there are actually studies that show that the safer a road’s traffic is, the better residents on opposite sides of the street get to know each other.”

Cllr Darren Merrill, cabinet member for environment and public realm, said: “I’m aware that the residents don’t think the traffic calming goes far enough, but as we are recording average speeds of around 20 mph this wouldn’t be a road that meets our criteria for priority investment to upgrade the cushions that are already there. But I would advise residents to apply for the next round of Cleaner, Greener, Safer funding which would help fund smaller scale schemes in the area.”