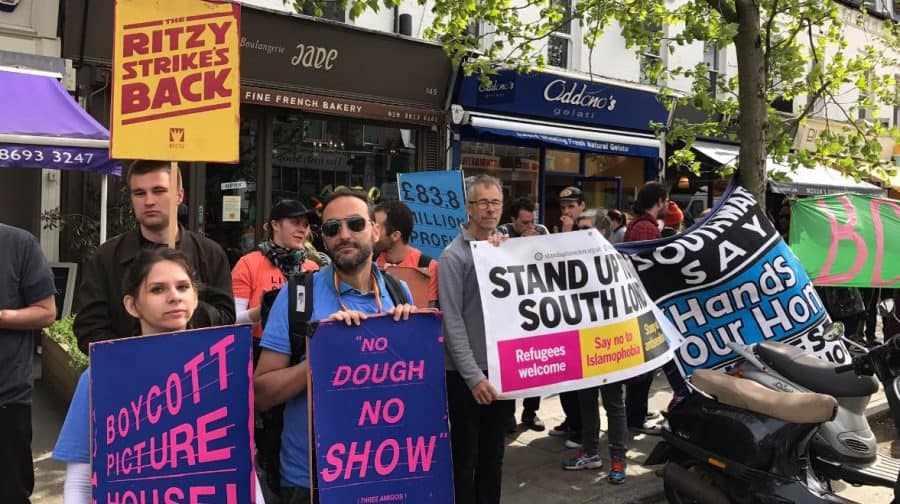 Cinema staff from the East Dulwich Picturehouse were out on strike on Saturday, as part of a long-running campaign to be paid the London Living Wage.

As well as the 2017 wage rate of £9.75, staff at various Picturehouse-owned cinemas, including in Brixton, Hackney and Piccadilly Circus, are demanding improved working conditions.

BECTU’s general secretary Joey Morrissey said: “East Dulwich staff are the latest to join [the LLW campaign]. We’re willing and ready to enter in conciliation talks with Picturehouse, who are actually owned by Cineworld.

“But at the moment, no one from the company will talk to us. And they won’t talk to us through ACAS [The Advisory, Conciliation and Arbitration Service].”

The strike was also coincided by staff from other Picturehouse staff, including the Ritzy in Brixton, who held a demonstration in solidarity.

A spokesman for Picturehouse said: “Our pay rates are significantly above the Government legislated National Living (£7.20 per hour) & Minimum Wage (£6.95 per hour).

“Increases in pay for front-of-house people in Picturehouse Cinemas have far outstripped inflation over the last three years.

“Our people are hugely important to us, we pay fair wages and have a wide range of benefits within a good working environment.”