The proposals would see the former Dulwich Constitutional Club converted 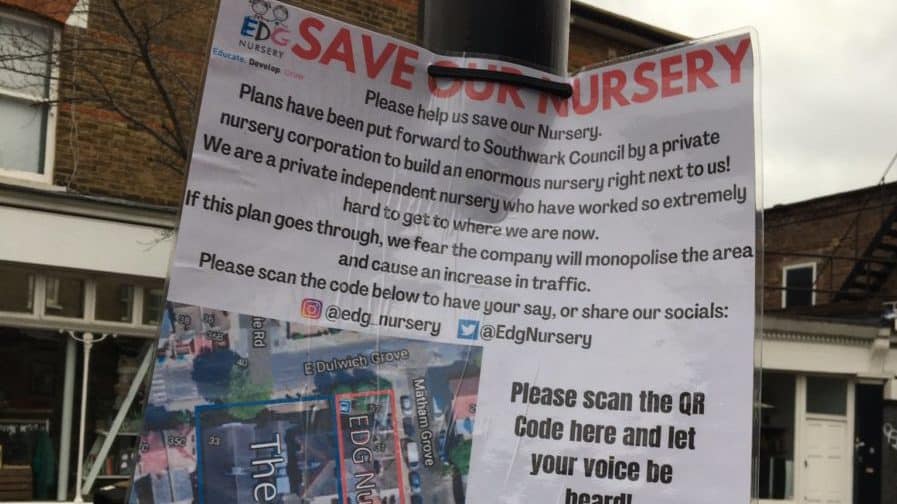 The owners of a small independent nursery in East Dulwich say plans for a 195-capacity rival next door could destroy their business – as well as losing one of the only remaining community centres left in the area.

Two planning applications have been submitted to Southwark Council to convert 33 East Dulwich Grove, the site of the former Dulwich Constitutional Club, into a 195-capacity nursery with 51 staff members.

The application is due to be assessed by Southwark Council’s planning committee on January 19. It has been proposed by early years provider N Family Club, and its financial backers  NSS IV (Investments) LLP.

More than a hundred objections have been lodged against the new nursery, and the loss of the community centre, which dates back to the 1880s and has been used variously as a first aid depot during the Second World War, and as an events and function space.

Alex Ng, the manager of EDG Nursery – an independent business on East Dulwich Grove – says if given the greenlight the huge new nursery would ‘swallow up’ businesses in the area that have worked hard to survive throughout the pandemic.

Alex says there are around 43 nurseries within the area, including nineteen other companies within 25 minutes’ walk of the site whose businesses will all be threatened. Although financially viable, many may struggle to cope with a large provider entering the market. Tellingly, many have spare spaces – casting doubt on claims there is a need for new provision.

The application states the new nursery, if built, would operate a ‘no car policy’, a point of contention for local businesses.

Since the Melbourne Grove Low Emissions Neighbourhood more traffic has been idling directly outside the nursery. There are concerns the development would, despite claims otherwise, only further increase traffic due to the sheer number of places and staff.

In a letter to parents, Alex described the ‘complete turmoil’ the nursery, like all families, has had to adapt to: “Should these applications be granted, this new nursery will have a huge detrimental effect to EDG Nursery and numerous other nurseries within the area.”

News that the former club could be turned into a commercial operation has touched a nerve among residents.

One objector commented: “In times like these we need to promote places of social and communal spirit which massively help in providing hope and happiness to large parts of the community.

“The East Dulwich Constitutional Club is a special and unique space which we are so lucky to still have and needs to be used in a way in which will benefit and reach out to as many members of the community as possible whilst maintaining its charm and character.”

Another described the proposal as “bad for our community, bad for a much-loved piece of East Dulwich’s history, bad for the fantastic nursery that already exists next door, bad for local pedestrians and bad for our neighbourhood’s air and noise quality.”

“In keeping with this the nursery runs a curated, monthly programme of one-off special events, workshops, talks and shows aimed at both families and parents.”

It also notes its Hackney site has been rated ‘outstanding’ by Ofsted across all areas.”

The application also emphasises that sustainable or recycled materials will be used where possible, with heritage assets in the building also maintained.

A decision will be made on Wednesday, January 20.