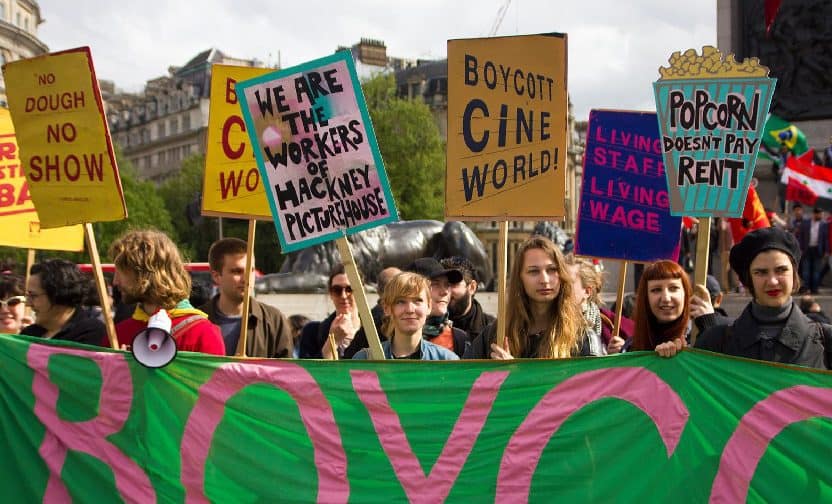 East Dulwich Picturehouse staff in Trafalgar Square for May Day

East Dulwich Picturehouse staff went on strike again on Monday as they joined May Day demonstrations in Trafalgar Square.

Staff from East Dulwich were the latest of Picturehouse Cinemas Ltd’s five London branches who have campaigned for the London Living Wage since last year.

The East Dulwich staff, represented by the Broadcasting, Entertainment, Communications and Theatre Union (BECTU), also joined a demonstration outside the Picturehouse Central cinema in Shaftsbury Avenue.

Ben Lennon, who works as an usher and table waiter at the East Dulwich cinema, told the News that staff had originally planned to hold separate demonstrations at each of the five branches. But that plan was abandoned because new regulations under the Trade Union Act (2016) require strike to have their own trained “strike supervisors”.

But the 25-year-old from Peckham said the May Day celebration had an “exciting atmosphere”. He added that £600 has was donated to their strike fund.

While the bigger protests took place in central London, a group of local residents handed out leaflets in support of the strike outside the East Dulwich branch.

Picturehouse Ltd previously said that increases in pay for front-of-house staff had outstripped inflation for the last three years, and that their staff are “important” to them, and paid “fair” wages.