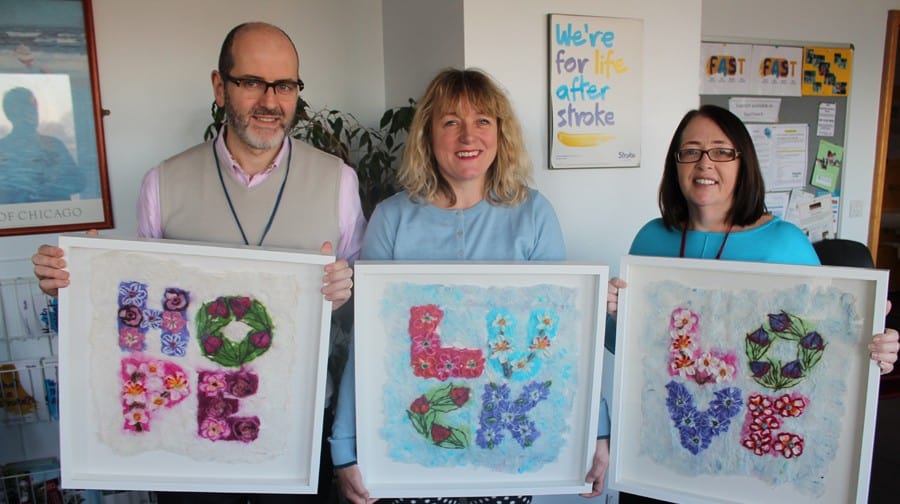 A stroke survivor from East Dulwich has donated three pieces of her own artwork to the hospital that saved her life.

She was rushed to King’s College Hospital, where doctors used a metal tube to unblock an artery in her brain – one of the first times this treatment had ever been used on a stroke victim.

Despite having to learn to walk and talk again, Charlotte’s artistic skills were not affected by the stroke, something she credits her medical team with.

“The surgeons and doctors were absolutely brilliant, and I had such a brilliant recovery. Within a few weeks I was working again and after nine months I had an exhibition.”

The artworks were created from cotton fibres, which were used to create 3D designs and then painted. Maria Fitzpatrick, Nurse Consultant in Stroke Management at King’s, said: “We’re so pleased that Charlotte has made such a good recovery – her story highlights the importance of specialist stroke units like King’s and the benefits of treating patients quickly.

King’s place at the top of a 2014 national audit shows how the hard work of the entire stroke team is making a difference to patients like Charlotte. “Her kind artwork donation will be a great addition to the stroke unit that we hope patients will appreciate for years to come.” King’s stroke unit was recently named as the best-performing unit in the country.