Now Riley, of Lordship Lane, must serve a minimum of 23-and-a-half years behind bars 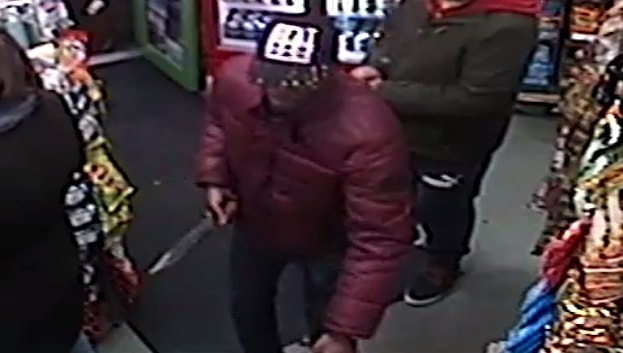 An East Dulwich man who killed a stranger with a hunting knife in a row over a cigarette in an off-licence was jailed for life yesterday (Tuesday, August 20.)

Jahmel Michael Riley, 24, of Lordship Lane, was previously found guilty of killing Dennis Anderson, 39, with a ‘large’ hunting knife in February in the Pay Less off-licence on the street.

He must now serve a minimum of 23-and-a-half years behind bars for the brutal murder following sentencing at the Old Bailey.

The court heard how the victim, Dennis, had been returning from a 60th birthday party in the early hours of Sunday, February 10 and went into the off-licence with a group of friends.

Riley, who had been ‘aggressively’ asking customers if they would give him a cigarette, was already inside the premises.

When he asked Dennis, whom he did not know, the same question, an argument broke out – before Riley unsheathed a large hunting knife.

Riley raised the knife, reported witnesses, before Dennis stepped towards him and attempted to wrestle the weapon out of his hands.

CCTV footage at the Pay Less store showed the pair struggling before spilling out into the street. “Dennis showed the heroic qualities that we all knew him for by trying to protect other members of the public and stop the situation escalating,” said his grieving partner

Here, the court heard, other footage showed Riley on top of Dennis, making a stabbing motion in his left side, causing a deep and fatal cut to his neck.

The 24-year-old had denied murder, claiming he stabbed Dennis, of Lewisham, accidentally when they fell.

He had also told the court that he only had the hunting knife because he had confiscated it from two youths earlier that evening, and had not yet disposed of it.

Dennis’s friends dragged murderer Riley off their pal and hit him – and he ran off towards Crawthrew Grove, abandoning his knife in the gutter, the court was told.

Despite the ‘valiant’ efforts of paramedics and members of the public, Dennis was pronounced dead shortly after 3am.

A post-mortem revealed several cuts, including to his jugular, as well as his carotid artery and the upper lobe of the right lung.

His distraught partner, Leeane Manzi, said the verdict was a ‘bitter-sweet’ feeling for the family, but that they were pleased a ‘very violent and dangerous person’ was off the streets.

“We are hoping it also teaches others a lesson that carrying and using knives is a life sentence for all,” she said.

“This would not have been possible without the hard-working, dedicated and compassionate work of the police that have supported us from the very beginning.

“On the night that he was so brutally attacked, Dennis showed the heroic qualities that we all knew him for by trying to protect other members of the public and stop the situation escalating.

“This did not surprise us when we found out, as looking out for others summed up Dennis’ character.”

“The sentence does not change a thing for us. As a family we are also serving a life sentence, this has left our hearts shattered and our lives turned upside down.

“We have fought one battle and now for us the real fight begins, learning to live a life without our Dennis.” Scotland Yard’s DI Domenica Catino, who led the investigation, said the case had filled her with ‘deep anguish’ as Dennis’s death was ‘totally avoidable’.

“My deepest sympathies extend to Dennis’ family and friends, particularly those that witnessed a shocking event unfold in such a needless manner,” she said.

DI Catino added her praise for those who tried to keep Dennis alive after the vicious attack.

Riley was caught after handing himself into Lewisham Police Station with family three days after the murder.

Detectives had already spoken to his father and brother, having taken DNA samples from his cap – which he abandoned at the murder scene.

Police were praised by the judge in the case, His Honour Judge Hilliard QC, who acknowledged the police’s “efforts and industry” in tracking down murderer Riley.